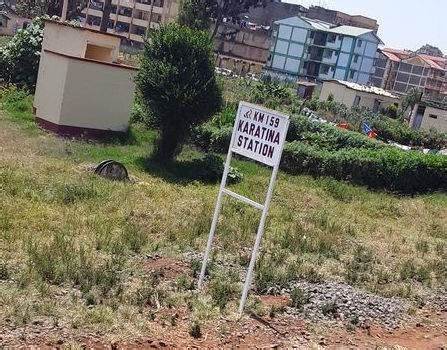 Police in Karatina Nyeri chased away residents who had invaded government land while chanting the names of President-elect William Ruto and his deputy, Rigathi Gachagua.

This is the same site, off the Nairobi-Nanyuki railway line, from which second-hand clothes traders were evicted two years ago.

The residents claimed that Gachagua had promised them the piece of land reportedly owned by Kenya Railways Corporation.

As a result, they demanded that the land be transferred and title deeds be processed immediately, claiming that Ruto and Gachagua assured them that the exercises would be carried out once they took office, allegations that could not be independently verified.

In a group of almost 100 members, the residents shouted and chanted “Freedom is coming” as they attempted to force their way into the land.

“We will return once our President is sworn in,” the group fled shouting after police repelled them.

One of the residents, while speaking to Nation Africa argued that the group did not break any law. He added that he hoped Gachagua would keep the promise he made.

“We have not broken any law. Mr Gachagua assured us that once they formed the government, this issue would be revisited. Now that they have won, I hope he will keep that promise,” he said.

Addressing the incident, Mathira sub-county Police Commander Benjamin Rotich stated that it was unlawful to invade land regardless of whether it was public or private.

“Even if it was private property, there is a legal way to go about it and if they want to conduct business there, let them approach Kenya Railways and have a lease agreement. You don’t wake up one morning and take other people’s property and we will not allow this to happen.”

Kenya Railways forcibly evicted over 2,000 traders from the reserve land in 2020.

This was done to make the rehabilitation of the railway line, which is now operational, easier. Since then, the area has been fenced off.

When Mr Gachagua described the eviction as politically motivated, the situation became political.

Mr Gachagua addressed the traders at the site, claiming that some “powers” were plotting to undermine him politically.

Nyeri Governor Mutahi Kahiga, who was re-elected last week, relocated the traders to another location in Karatina following the eviction.