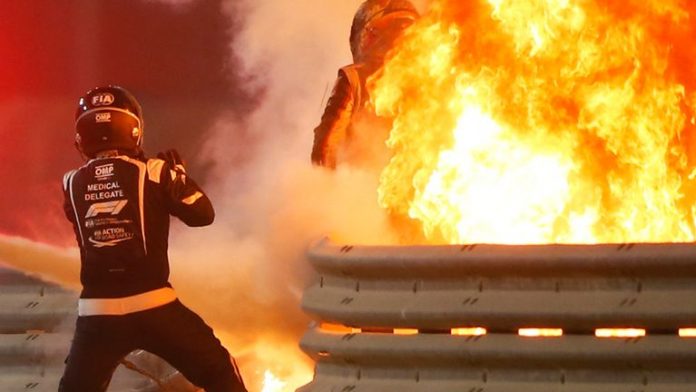 Time seemed to slow down as Romain Grosjean’s car — split in half from the force of hitting the race barriers — was enveloped in flames.

“I remember everything about it, every single detail — from the moment I started undoing my seat belt, to the moment I realized I was stuck in the car thinking it was okay, they [race safety staff] would come and help me to jump out, then realizing there’s fire,” says Grosjean.

Still battling the physical repercussions of the crash, Grosjean has also had time to consider its emotional consequences as he prepares to get back behind the wheel and race again.

Grosjean has decided for now that he won’t race at oval events, which includes the iconic Indy 500, in light of the crash in Bahrain.

Grosjean knows that it’s thanks to the halo, a mandatory protection device on F1 cars, that he’s able to return to racing.

“I never stopped thinking about Jules and I always kept in touch with mainly his father,” says Grosjean, who keeps one of Bianchi’s helmets on his desk at home and wears “JB17” on his own helmet during races.

I must say I changed my mind big time and that I won’t race a car with no halo because it’s saving our lives.

The crash in Bahrain, Grosjean says, helped him to recognize what he really wants at this stage of his career: “new things, new tracks, new people, new atmospheres. “

“I don’t feel like a superhero, I feel like a dad that has done what he had to do to go and see his kids,” Grosjean says of the crash.