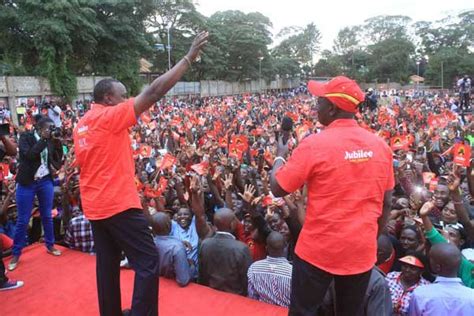 The big one has spoken. And spoken Loudly.
President Uhuru Kenyatta, in an elaborate interview targeting Deputy President William Ruto officially withdrew his support for him.
Uhuru, lately a replica of old Jomo less the fly-whisk, dared Ruto to resign from his position, if he so wished.
And with this, the tyranny of the GEMA votes, which Ruto has been drooling over has evaporated.
The DP now has to bear the consequences of the blatant presidential snub and the fear of the unknown, often, and silently inflicted by the deep state a.k.a the faceless system whose modus operandi no one seems to understand.
This is the chalice that Ruto must partake. The same bitter herbs swallowed by Kalonzo Musyoka in 2013…and served on a plate provided by Ruto.

Like is always the case, Ruto’s supporters believe he has a solution. What they have reckoned with is
long before Uhuru trashed the GEMA-Kalenjin political deal, the deep state must have analysed and played out possible consequences and scenarios.
Based on the dint of the 2013 political deal between the duo, Ruto’s political goose is cooked.
Then, Uhuruto, backed by the system elected to isolate the Kamba
and the Luo community votes.
The equation in the Luhya nation then invoked bankrolling Musalia Mudavadi to side step Raila in Western Kenya. It worked.

Not only did Mudavadi dock 700,000 plus votes from the Raila basket, but he also reignited his political career.
The math was simple. GEMA plus Kalenjin votes, and the master stroke of wasted Mudavadi votes was enough to ride Uhuruto to State House.
Now the boot is in the other foot. GEMA, with the Kamba , Luo, the Coastals and a Mudavadi spoiler stab at the Presidency will leave Ruto with meagre 4 million votes plus. Mainly from his Kalenjin nation.
Kalenjins, since former President Moi’s tenure in office, have developed a false sense of entitlement to the Presidency. Like the GEMA before them, they reckon other communities owe them a political duty of care.
This is the constituent and community mentality that Ruto has perfected since 2005. He will pay his last dime to retain it.

Interrogation of past voting waves has established that the Kalenjin will never vote for a cause that has nothing for them. The only communities known to have done that in Kenya are the Kamba, Kisiii and the Mijikenda.
And so Kalenjin votes, like those of the Kamba in 2007 and 2013 will not matter in 2022.
They will tally as genuine spoilt votes; whose only value addition is to cement democracy and elect devolution leaders.
This scorched voter strategy was developed by Ruto himself, after then Vice President Kalonzo Musyoka refused to back the Uhuruto project. History, they say repeats itself.
So, is there a way back to Uhuru way for Ruto?

First things. Uhuru is not a malicious politician. He can allow his Deputy to the scheme of things if he plays ball.
Notwithstanding the fact that the ball and the rules are domiciled in Uhuru’s pockets.
Based on Uhuru’s body language, the deep state wants Ruto to defer his Presidential ambition to after 2022.
Can Ruto buy in? The jury is still out there. But the experience of past Vice Presidents will come in handy for the Sugow born politician.
At 54 years of age, time, abbreviated T, is on his side. Rescheduling his presidential ambition is not only sensible, but will also not precipitate a crisis.
Being the political fox, he is, Uhuru has given a fake impression that there is no soft landing for his deputy.
This strategy aimed at wearing Ruto down, through utilisation of known political tools.
Perhaps it is time for the DP to wake up from his self-imposed power stupor and botanise his way to the epicentre.

What then is next for Ruto?
Based on the past, Ruto and his supporters can have their pick.

DP Ruto can take this path and bid his time until 2027. Because 2022 is an unrealistic target as things now look. In the meantime, he can warn the official opposition benches like Kibaki and Uhuru before him.

During the Goldenberg debate in Parliament in 1993, Saitoti famously said everyone should carry his cross in the Goldenberg proof. He was being smart. The system noticed that he harboured an escapist mentality, an NGO mentality. Moi, the ruthless operator advertised for his replacement.

He got a candidate in a young Uhuru Kenyatta. But the tackless Gatundu South residents, led by Moses Muihia and Moses Kuria delayed the coronation in 1997 by refusing to vote him as MP.

3.Stephen Kalonzo Musyoka
He remains one of Kenya’s foremost political gentlemen. He is unassuming. He should have succeeded President Moi in 2002, but he lacked a credible broker to navigate him through the deep state.
He has hardened well politically, never controversial and has remained loyal to the system: he never seeks to rattle the established order of things and is always ready to be led.
For this, he is ahead of Ruto in the ranking of the deep state to one day rule Kenya.

4.Raila Odinga
The most trusted politician by the Kenya masses. He has a fanatical following by the youth and the elderly. Until 2007, the Middle Class never trusted him.
In terms of ratings, Raila Odinga has a fanatical following across the country. But somehow this following has not translated to votes. Plainly put, Raila’s presence in any shopping Centre in rural Kenya will cause a stampede.
But one unfortunate incident in 1982 has been his Achilles wheel. There is no evidence yet about allegations that he connived to overthrow the Government during the 1982 coup.
But the allegations have been a major drawback to Raila. Has this been swept under the carpet or is it a wild card for 2022? Keep it Uzalendo news.