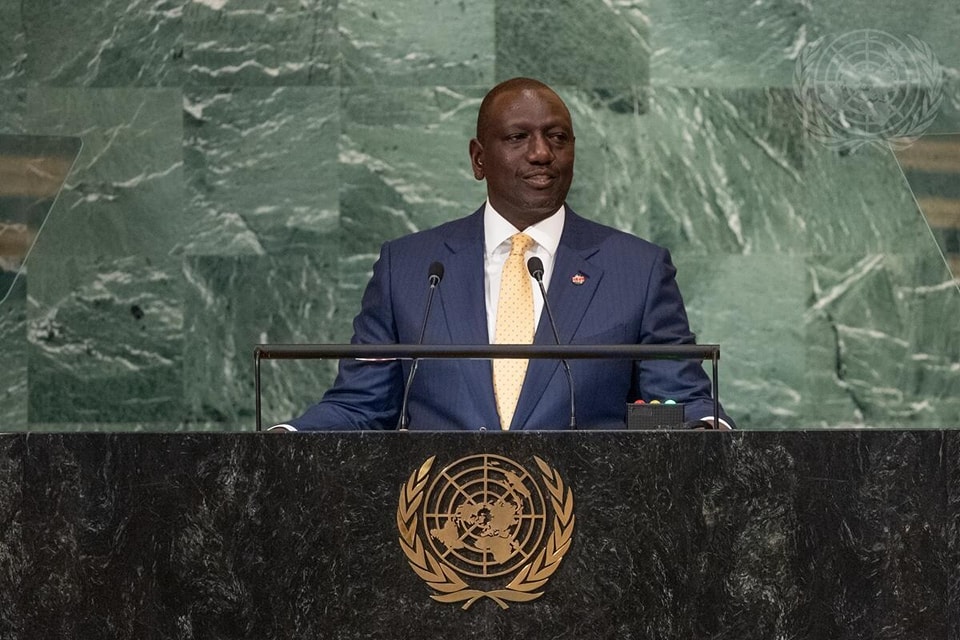 President William Ruto has called for urgent reform of the global decision-making system that will give Africa and the developing world a stronger voice.

Speaking when he delivered his maiden statement at the United Nations General Assembly in New York, the President said the UN Security Council, the top organ of the institution, must be opened to more members so that it can adequately confront emerging global issues.

He pledged that Kenya will take a leading role in pushing Pan-African objectives at the global stage and will use its position as a member of the UN Security Council to amplify Africa’s voice.

“It is our manifest intention to see greater Pan-Africanisation of the global agenda and to make multilateralism work for the people of the world in their diversity. It is time for multilateralism to reflect the voice of farmers, represent the hopes of villagers, champion the aspirations of pastoralists, defend the rights of fisherfolk, express the dreams of traders, respect the wishes of workers and, indeed, protect the welfare of all peoples of the Global South,” he said in his address on Wednesday afternoon in New York.

On the need to reform the Security Council, President Ruto said Kenya remains convinced that th absence of comprehensive reforms in the council undermines its moral authority and effectiveness as a global democratic institution.

He said the Security Council needs to pass the inclusivity test in order to be fit to spearhead the drive for a just and inclusive world order.

“Threats to democracy will not be credibly resolved by an undemocratic and unrepresentative Security Council. It is vitally important for this critical institution to reflect the values it is entrusted to protect, defend and uphold on behalf of humankind,” said the President in his address on Wednesday.

The Head of State welcomed the call by United States President Joe Biden, who spoke ahead of him, for the expansion of the membership of the Security Council.

“We welcome the call by President Biden this morning for the expansion of the membership of the Security Council as a significant step in the right direction, and we look forward to building consensus for its actualisation,” said President Ruto.

He said the COVID-19 pandemic, that was severe globally for two years beginning in November 2019, laid bare the failure and inequality of the multilateral system. As a result, he said, Africa and the Global South were relegated.

“Global supply chains remained impervious to demand in the Global South generally, and Africa in particular. Unequal access to vaccines underscored this unjust and unequal situation with unforgettable clarity,” said the President. “Whenever human life, security and welfare are in jeopardy, it is immoral to administer interventions through frameworks anchored on fundamental inequality,” he added.

He said there was an urgent need to correct the failures of the global system because they “relegate the people of Africa and normalises humanitarian neglect, leading to other casual injustices are failures of humanity”.

The Head of State called on countries implementing the Global Fund programmes to be at the forefront in championing successful replenishment of the fund that was created to eradicate HIV, TB and malaria, three epidemics that have afflicted Africa.

He said a robust and reformed multilateral system is the only path to a peaceful, stable and prosperous world for all.

“This is the imperative of our time, and the call of this moment. It is time to work on the trust deficit with stronger conviction that none of us is really safe until all of us are safe,” said the President.

While reinforcing the need for urgent reforms in the multilateral system, President Ruto called for a paradigm shift in the responsiveness of the UN. He said more efforts are required to match resolutions at the top with actions and solutions.

“The integrity of the international order must be measured by the distance separating our resolutions, consensus and agreement from decisive actions, committed interventions and effective solutions. A watershed moment, therefore, demands that we reduce that gap drastically and quickly,” he said.

In his address, the President drew attention to the droughts in many parts of the world, including the Horn of Africa. He called for global collaboration to support countries that are vulnerable.

He further called on global financial institutions to relook the debt burden of developing countries that face economic crises following disruption by the COVID 19 pandemic.

“I join other leaders in calling upon the World Bank, the International Monetary Fund and other multilateral lenders to extend pandemic-related debt relief to the worst-hit countries, especially those affected by the devastating combination of conflict, climate change and Covid-19,” he said as he also called on the G20 countries to suspend or reschedule debt repayments of middle-income countries during the pandemic recovery period.

The President also underscored Kenya’s role in regional security and the efforts it has dedicated to finding peace within and outside its region. He called for more partnerships in promoting sustainable peace and stability.