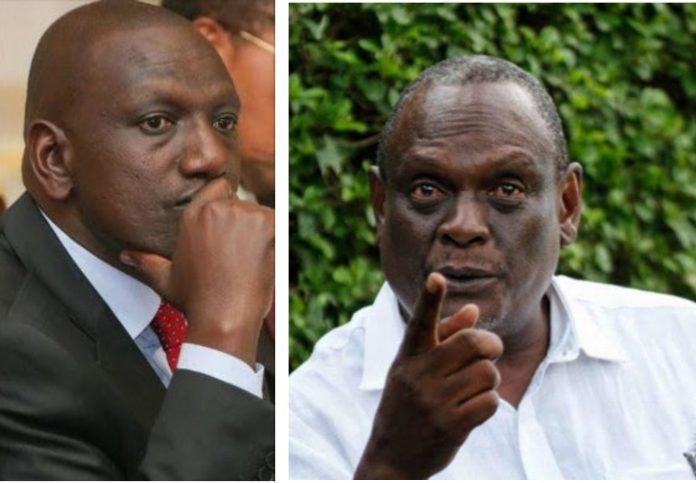 Murathe said the Presidency will not be passed on to DP Ruto on the basis of personal relationship with President Uhuru Kenyatta or promises made on the heat of political moments.

Speaking on Citizen TV live from Malindi, the Ruto tormentor said Jubilee will support Raila Odinga for the presidency to repay him for the many years he was detained by KANU and President Daniel Arap Moi.

Murathe said he was his own man and never speaks for President Uhuru Kenyatta. But qualified that he and the President are bosom political buddies for many years.

Murathe dismissed the deep state onslaught on William Ruto and said that the DP was part and parcel of the amorphous powerful group.

He said the political differences with Ruto are not personal and explained that the fall out was caused by allegations of graft, land grabbing and embezzlement of public property.

“We can’t trust Ruto. He is baggage and political garbage must be offloaded” Murathe said.

He said the Jubilee Party severed ranks with Ruto after he started early campaigns to kick President Uhuru from power.

“He took off without a relay burton. Even if he comes back for it, he can’t deliver”, he said.

Murathe said should Raila decide not to run, Wiper leader Kalonzo Musyoka and KANU chair Gedion Moi were possible candidates for the seat.

He said both are coalition partners.

Murathe said Jubilee will leave all political options open, because Ruto is not part of the Jubilee agenda.

Ruto case is not peculiar. Kalonzo was by passed by President Uhuru, just like Moody Awori.

He must stick to his lane, Murathe said.