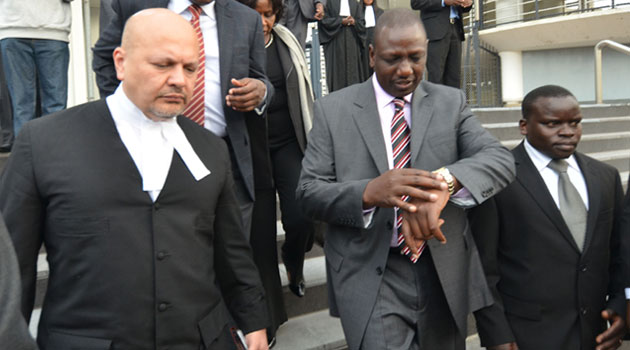 The prosecution in the Paul Gicheru trial is transmitting “evidence” implicating Deputy President William Ruto in a witness corruption scheme that undermined the case against him and radio journalist Joshua arap Sang.

The evidence demonstrates that the pattern of witness tampering was done for the benefit of, and in coordination with, William Samoei Ruto, according to the newest brief signed by Deputy Prosecutor James Stewart and presented on November 22.

If the information proves to be true, it will start a new battle between him and the International Criminal Court (ICC).

Dr. Ruto also faces charges of corruptly influencing a witness under Article 70(1)c, which could result in him serving five years in prison and paying compensation to victims of the post-election violence in 2007/8.

Between May 9 and July 19, 2013, Mr Gicheru allegedly pressured witness P-0341 and demanded that he draft a handwritten affidavit.

“He said Ruto had requested this second document. Mr Gicheru instructed P-0341 to write that he had no evidence against Ruto and that he was withdrawing from the IC proceedings,” the papers say.

P-0341 is said to have complied because he was afraid for his family if he refused.

“A couple of days later, Gicheru informed P-0341 that Ruto was pleased when he received the affidavit, and had instructed Gicheru to give P-0341 more money,” the court papers say.

He allegedly collected Sh100,000, and the witness allegedly placed Sh50,000 in a Cooperative Bank account.

However, there was a close call because the witness had encountered “several White individuals.”

This witness received roughly Sh2 million in a series of sessions, part of it in cash which was placed into the accounts of the Co-op Bank

Before P-0274, Mr Gicheru is believed to have commented: “they preferred to pay witnesses to make them stop assisting the ICC. They needed to reach everyone involved in the case, and that the Mkubwa (big man), which P-0274 understood to mean Ruto, “wanted no stone left unturned”