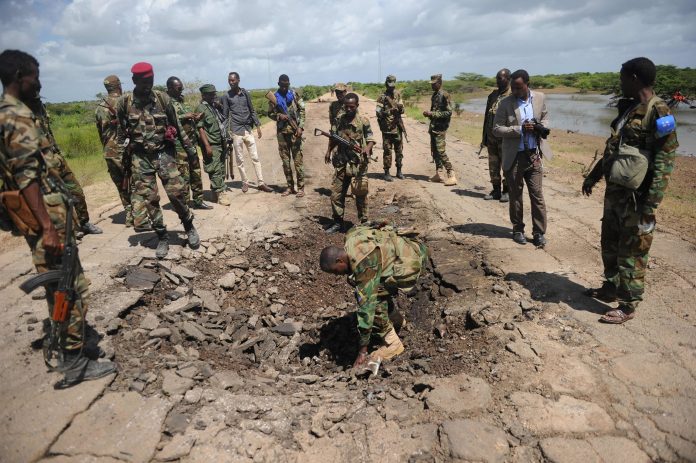 Four Somali soldiers were killed and a U.S. service member was injured Monday in an al-Shabab attack on an outpost 60 kilometers west of the Somali port town of Kismayo.

A senior leader in the Jubaland regional administration told VOA Somali that the soldiers died when a vehicle-borne explosive device hit their camp early Monday.

Several other soldiers were wounded, including a U.S. service member. The official said the U.S. soldier suffered injuries to a leg.

A spokesman for the United States Africa Command confirmed that a U.S. soldier was injured in the attack. Colonel Chris Karns told VOA that the incident happened in Jana Abdalle at a time when the U.S. and Somali forces were conducting an advice, assist and accompany mission.

The U.S. service member is in stable condition and receiving treatment for injuries that are not considered to be life-threatening, according to Karns.

Karns said the militants used a vehicle employed as an improvised explosive device and mortar fire. At least one al-Shabab fighter was killed in the attack, he said.

The senior Jubaland official told VOA Somali that the suicide vehicle, driving at high speed, approached the outpost as soldiers fired on it in an attempt to detonate it before it reached them.

Somali and U.S. forces seized the area from al-Shabab on Saturday. Regional officials said the area is a strategic economic hub for al-Shabab, which uses it to collect tax and other extortion from commercial vehicles and goods traveling within Somalia and to Kenya.

Traffic along Jogoo Road To Be Disrupted Over the Weekend