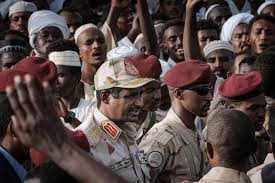 Sudan’s transitional power-sharing government has reached a peace deal with an alliance of rebel groups from the troubled western region of Darfur.

The government says it initialed a pact Monday in Juba, the capital of neighboring South Sudan, with the Sudan Revolutionary Front, which includes the Justice and Equality Movement and the Sudan Liberation Army.  The coalition includes rebel groups that have fought in the neighboring southern states of South Kordofan and Blue Nile.

The final agreement offers the rebel groups political representation, integration into the national security forces and economic and land rights.

The pact also allows for people who fled Darfur to escape the bloodshed to return to their homes.

The negotiations were brokered by South Sudan, which broke away from the larger Sudan in 2011 after years of fighting. A formal signing ceremony was taking place later Monday in Juba.

About 300,000 people have been killed in Darfur and 2.5 million others displaced from the homes since rebels took up arms in 2003 against the government of autocratic President Omar al-Bashir. Bashir responded with a counter-insurgency campaign carried out by Arab-dominated janjaweed militia forces.

Bashir’s government was ousted by a popular uprising last year and replaced by a power-sharing government composed of civilian and military leaders.