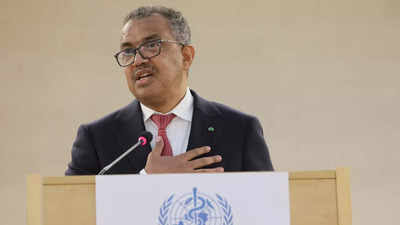 Tedros Adhanom Ghebreyesus, Director-General of the World Health Organization (WHO), has been re-elected for a second term.

On Tuesday, WHO said that the World Health Assembly Member States re-elected Dr. Tedros to serve a second five-year term as WHO Director-General.

“Today at WHA75 (the World Health Assembly Member) States re-elected @DrTedros to serve a second five-year term as Director-General of the WHO. Dr. Tedros Adhanom Ghebreyesus’s new mandate officially commences on 16 August 2022,” the WHO tweeted.

The secret ballot vote, announced by Djibouti’s Ahmed Robleh Abdilleh at a major annual meeting, was seen as a formality as Tedros was the only candidate running.

After his re-election, Dr. Tedros expressed gratitude to Member States for the opportunity to serve a second term.

“Humbled and honoured to be elected to serve a 2nd term as @WHO Director-General. I’m deeply grateful for the trust and confidence of Member States. I thank all health workers and my @WHO colleagues around the world. I look forward to continuing our journey together,” Ghebreyesus tweeted.

Dr. Tedros implemented a wide-ranging transformation of the WHO during his first term, with the goal of increasing the Organization’s efficiency and driving impact at the country level to promote healthier lives, protect more people in emergencies, and increase equitable access to health.

He also oversaw WHO’s response to the COVID-19 pandemic, Ebola outbreaks in the Democratic Republic of the Congo, and the health consequences of numerous other humanitarian crises.