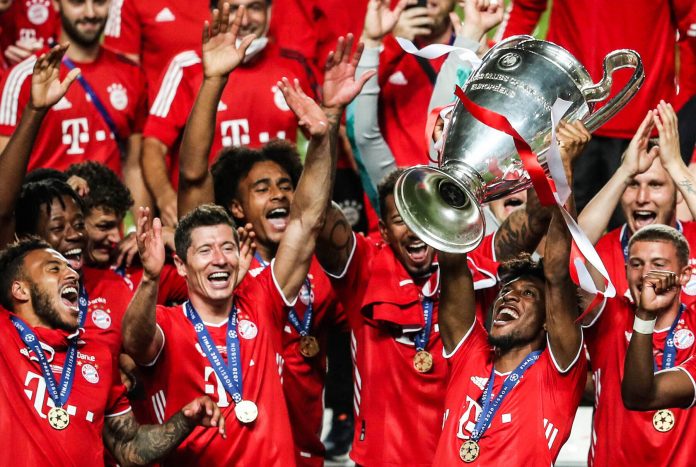 Bayern Munich returned home to a subdued reception on Monday after winning the Champions League final against Paris Saint-Germain in Lisbon the night before.

The club had already warned fans to stay away from Munich airport to avoid the risk of coronavirus transmissions, and said the players and team staff would be whisked away so there would be little chance of fans getting a glimpse of their heroes.

In the absence of ecstatic crowds, Bavarian state governor Markus Soder greeted coach Hansi Flick and his team on the tarmac after they got off their aircraft.

‘This is one of the most impressive Bayern teams that we’ve ever seen,’ said Soder, a fervent Bayern fan, who touched arms with the players to maintain hygiene standards.

‘The whole of Bavaria is proud.’

Bayern had already won a German league and cup double, so winning Europe’s premier competition ensured just its second treble after it previously achieved the feat under Jupp Heynckes in 2013.

Bayern’s heroes had celebrated long into the night in Lisbon after defeating Paris Saint-Germain 1-0 to seal their sixth European crown.

Kingsley Coman’s second half header proved to be the decisive strike for Flick’s men, sealing the treble for Bayern and sending Neymar and Co home in tears.

For the jubilant Bayern squad, captain Manuel Neuer hoisting the trophy aloft was just the start of the party.

They headed on to celebrate together in the aftermath, with Philippe Coutinho showing the players dancing to music and appearing to enjoy a drink on the team bus.

The team were also filmed by Lucas Hernandez singing along to ‘We are the Champions’ by Queen as they headed to their destination to keep the party going.

Alphonso Davies, whose stand-out moment of the tournament arguably came in the quarter-final with his phenomenal assist for Joshua Kimmich’s goal against Barcelona, was central to the celebrations