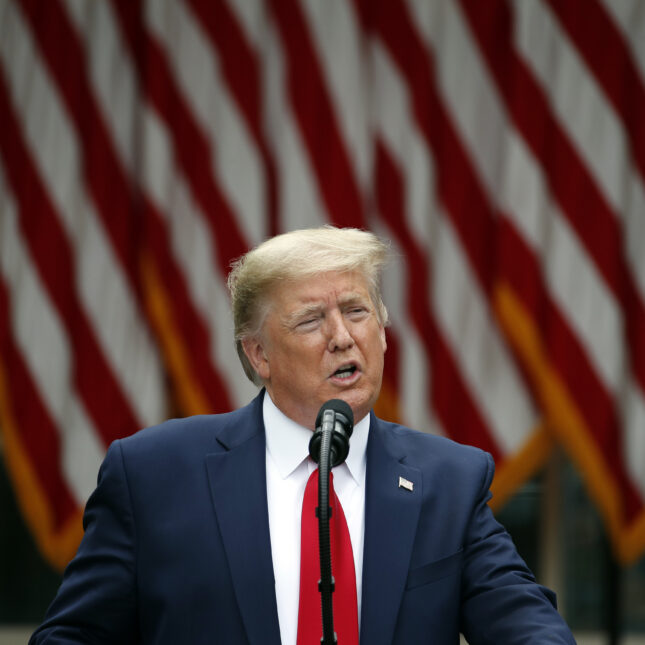 WHITE HOUSE – Just minutes after delegates to the Republican National Convention in Charlotte, North Carolina, formally awarded him the party’s nomination on Monday, President Donald Trump told them the only way the Democrats can defeat him at the polls in November is through a rigged election using mail-in-ballots.

“They’re trying to steal the election,” Trump declared without evidence during a formally unannounced but highly expected appearance before the convention. “Suppose they don’t mail them to Republican neighborhoods.”

The election is shaping up to be “the greatest scam in the history of politics,” the president remarked in a mostly unscripted speech on the first day of his party’s convention.

As part of a significantly scaled-back proceeding in response to the coronavirus pandemic, only a small fraction of the total Republican delegates took part in nominating Trump and Vice President Mike Pence for a second term.

Later in his nearly one hour of remarks, the president, who trails Democratic presidential nominee Joe Biden in national polls by eight or nine points, accused the Democrats of “using COVID to steal an election.”

Trump, seeking a second and final term, was welcomed to the podium at a convention center with chants of “four more years” from his party’s delegates.

“If you want to really drive them crazy, you say 12 more years,” replied the president.

As Trump lashed out at Biden and the Democrats, former Arizona Sen. Jeff Flake, alongside more than two dozen former Republican members of Congress, endorsed Biden for president. Flake, a longtime critic of Trump, wrote in an op-ed for The Washington Post last September that the president had “proved to be so manifestly undeserving of the highest office that we have.”

Although Republican party officials had previewed the convention as an upbeat and optimistic view of the country and the Trump administration’s performance, the president’s opening day remarks cast a darker tone.

As he has done repeatedly in recent times, Trump attacked Biden as a puppet of the radical left, warning that if the former vice president is elected in November, “Your American dream will be dead.”

The president vowed that the United States “will never be a socialist country.”

The extended appearance by Trump and the tone of the remarks were another break with tradition for the unconventional president.

Usually, nominees are low-key during political conventions until they deliver their acceptance speech. But Trump is set to speak to the delegates every day in a convention that will now shift from Charlotte and focus more on speeches delivered by scores of politicians and ordinary Americans.

The president said he would discuss his administration’s efforts to battle the coronavirus during his formal address on Thursday evening from the South Lawn of the White House — an event to be immediately followed by the launching of fireworks from the National Mall.

“This is the most important election in the history of our country,” Trump told the delegates on Monday. “Our country can go in a horrible direction or in an even greater direction.”

Unlike last week’s virtual Democratic convention, which formally nominated Biden, the Republicans brought 336 delegates to Charlotte for an in-person roll call. The Democrats, by contrast, created a live and taped video montage for their roll call.

Some Republican delegates in the Charlotte Convention Center ballroom were wearing masks, which are required, but others had no face protection. Attendees are also required to maintain a 1.8-meter distance from each other, but many were seen flouting that rule, as well.

Kyshia Lineberger is a North Carolina delegate who lives in Charlotte, the host city of the convention. She said support for Trump is a family affair and that her 15-year old son is looking forward to the first presidential debate between Trump and Biden.

She said she appreciated that Trump brought up medication prices in the U.S. “Americans can pay $2.50 for a medication that is 10 cents somewhere else, when you talk about pennies and dollars. And that’s just wrong,” she said.

Tennessee Delegate Oscar Brock said he was impressed with Trump’s energy at the podium for the lengthy speech. His comments on the impact of judges will stick with him.

“There were 400-some vacancies when the Republicans took over four years ago,” Brock said. “The administration has filled more than 200 of those vacancies. That’s going to change a generation of legal outcomes. Hopefully with conservative outcomes.”

Trump contrasted the Republicans’ convention with that of the Democrats, during which Biden and his vice presidential nominee, Sen. Kamala Harris of California, did not travel to Milwaukee but instead appeared in Biden’s hometown of Wilmington, Delaware.

“They didn’t go there at all,” said Trump. “We did this out of respect for your state.”

“You have a governor who is in a total shutdown mood,” said the president. “I guarantee you on Nov. 4, it will all open up.”