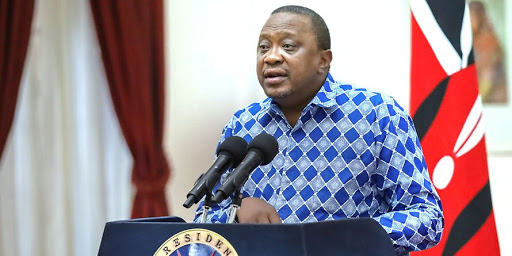 The President said the campaign which is set to kick off on September 1st is dubbed ‘Cleaning Up Kenya Campaign’ and shall be led by cadres of the National Government Administration Officers (NGAOs).

“The Campaign shall be anchored on the National Government Administration Officers at the local level who shall work together with the local communities and with stakeholders both within and outside of Government to enhance environmental restoration, conservation and management,” the President said.

The Head of State pointed out that the campaign fits within the ongoing ‘Kazi Mtaani Programme’ and shall complement the efforts being made towards the improvement of environmental and sanitation conditions at the grassroots level.

“Within the Cleaning Up Kenya Campaign, Chiefs are encouraged to proactively involve vulnerable members of their local communities and marginalized groups such as Women, Youth and Persons Living with Disabilities,” he said.

President Kenyatta spoke Friday evening during the launch of the Michuki Memorial Park in Nairobi County.

The Park is named in honour of the late former Minister John Michuki who a played a key role in the clean up of Nairobi River and its environ during his tenure as the Minister for Environment.

President Kenyatta pointed out that besides Michuki Park, the Government is working on renewing several other green spaces within the city among them the Nairobi Arboretum, Karura Forest, City Park and Ngong Road Forest.

“And we hope to extend this re-birth of our environment or what I call the ‘green renaissance’ to all Counties of the Republic,” President Kenyatta said.

The President regretted mistakes of the past especially weak enforcement of environmental and sanitation that led to Nairobi losing its green city status.

“As Government, we did not enforce the civic responsibility of the citizen to take care of the green spaces. And the citizens of Nairobi city were not organized enough to protect it.

“Because of this, and the rapid growth of ‘concrete spaces’ over the ‘green spaces’, there was a collapse of civic order and national duty in the city,” he said.

The Head of State said every Kenyan has a responsibility to conserve the environment and quoted from several books including the Bible, the Qu’aran and the Vedas to emphasize the importance of environmental conservation.

President Kenyatta said green spaces are the lungs that help cities to breath by improving on the quality of air and absorbing toxins emitted by the environment.

“And this is why we are targeting a 10% forest cover across the entire country by the year 2020. Within Nairobi, the Michuki Park is the first attempt at pushing this ‘green renaissance’,” he said.  Besides their environmental health value, the President said parks are historically spaces of freedom of expression. He cited Kamukunji Grounds as the place where the national question of Kenya’s independence was posed and debated by Africans.

“And because they are spaces of national expression, recreation and reflection, urban green spaces are the physical representation of the soul of the city,” the President emphasized.  Other speakers were Nairobi Governor Mike Mbuvi Sonko, Environment and Forestry CS Keriako Tobiko and Nairobi Metropolitan Services Director General Major Gen. Mohammed Badi.