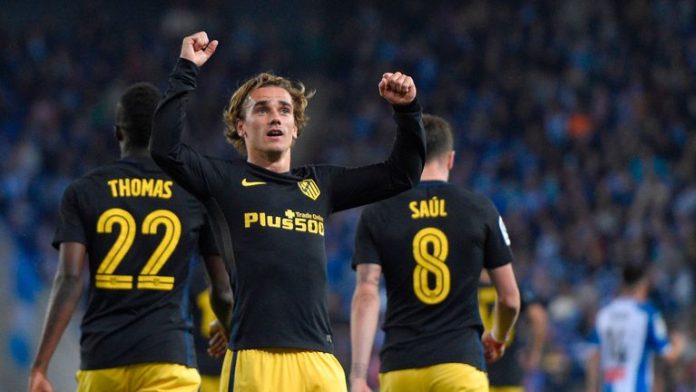 According to their boss Diego Simeone, Atletico Madrid play better with Antoine Griezmann in their line-up. So why – last weekend’s derby against Real Madrid apart – has he been used this season only as a substitute coming on for the last half hour of all games?

Less is more, so they say, and that would certainly seem to apply to the Frenchman who, despite playing for only about a third of the minutes available to him, is the club’s joint top goalscorer with Alvaro Morata on three goals.

We need to remind ourselves just how hot an asset the World Cup-winning Griezmann was when he signed, aged 28, for Barcelona from Atletico for £108m on Bastille Day in July 2019. Three years on, he is still the sixth most expensive footballer in history.

The problem is that the signing of Griezmann is synonymous with the acrimony that featured so strongly in deals carried out by the club’s former president, Josep Maria Bartomeu.

The deal was mired in controversy which continued even after the player had arrived at Barcelona.

On 1 July that year, Griezmann’s buyout clause dropped from 200m euros to 120m, with the striker completing his move to Barca 12 days later.

Atletico were not happy, claiming “it is obvious the agreement between the player and Barcelona was closed before the [buy-out] clause was reduced” and initiated procedures to receive the higher fee.

Nothing came of it, with Barcelona presumably telling Atletico at the time to “read the contract”.

Barcelona can not be too surprised that Atletico are now telling them to do likewise.

Many of the club’s key players at the time would have preferred to see the return of Neymar, who had left to join PSG in 2017.

The Brazilian was very much up for the move but Bartomeu fanned the flames by continually denying there was a deal in place to bring in Griezmann, even though it was clear there was one.

It was a bad start and was always going to hamper his ability to hit the floor running when it became clear that his arrival was a fait accompli and any talk about the return of Neymar had been nothing more than smoke and mirrors.

The likes of Gerard Pique, Jordi Alba and Luis Suarez were never going to need much of an excuse to become irritated by everything about Griezmann, from his sense of humour to his childish way of celebrating goals.

Consummate professional as he was – and still is – everything about the ill-fated deal suggested right from the beginning that he was never going to settle in among the Barcelona hierarchy.

And so it turned out, although it was hardly his fault. He was frequently played out of position, sometimes on the right, other times on the left, but never complained.

In fact, Griezmann would have been more effective used in the same space occupied by Leo Messi, but that place was taken by the best in the world.

When the rot set in and it became clear that Barcelona had to sell players if they were to survive, Griezmann found himself at the top of the list.

Not that he minded too much, in fact Griezmann couldn’t believe his luck. He adores Atletico as much as everyone at the club does him and he couldn’t wait to return.

A two-year loan deal was struck between the two clubs that stipulated that if Griezmann played more than 45 minutes in more than 50% of the games then Atletico would be contractually bound to pay Barcelona 40m euros to sign him permanently.

Sighs of relief all round, not least from Barcelona who rid themselves of the 38m euros a year they were paying Griezmann and will have to continue to pay him should he return to the club. His contract with Barcelona does not expire until 30 June, 2024.

Last season, Griezmann played more than 80% of the minutes. Were he to play a similar amount this season then Atletico’s obligation would very soon kick in.

The solution? For the French forward to come on from the 60th minute onwards, thereby guaranteeing that his appearances do not count as a full game and the percentage decreases below 50%.

The percentage of minutes played during the loan deal was being reduced towards the 70% mark.

After the Porto Champions League game, with tongue very firmly pressed against his cheek, Simeone said: “The reality is that he is doing very well playing 30 minutes, we don’t know how he will do if playing 60.″

Now at least everyone knows where they stand and Simeone has given up trying to persuade us that his decision to leave the introduction of his most talismanic player until the last half hour is nothing other than a tactical manoeuvre. “I am a club man,” the manager has said about the matter.

The problem is that, despite starting against Real, Griezmann is unsurprisingly becoming increasingly cheesed off with being used as financial pawn in this big money stakes ‘Mexican stand-off’ that is taking place between the clubs

He is being professional about it and when he plays he does it with the enthusiasm of a kid that has just started. Against what some have published, Griezmann never agreed not to play from the start, he just follows orders.

Things are now looking like they are beginning to reach a climax and last week Barcelona threatened legal action, via friendly members of the media, with the suggestion that what Atletico was doing was illegal.

The truth is – and Barcelona know it – that as the contract stands Atletico are doing nothing wrong and while he remains on loan to them they can play Griezmann as often or as infrequently as they wish. But Atletico need him as they are now eight points from the top.

A recent article in the French newspaper L’Equipe suggested that the two clubs are on the verge of agreeing a 25m euro-deal that would allow Barcelona to get rid of the potential financial burden and also let Atletico have unlimited access to the player.

Atletico deny they are close to an agreement, while Barcelona are a bit more optimistic.

This summer Atletico offered Barcelona 20m euros to draw a line under this matter. They did so comfortable in the knowledge that Barcelona did not want to pay Griezmann’s wages at any time in the near future.

They also knew that Barcelona had already factored in – among the elaborate asset selling, convoluted loan arrangements and number crunching that has been going at the club – the arrival of this 40m euros.

Atletico’s offer was rejected out of hand and they were reminded by Barcelona that they should stick to the contract although the Madrid club would contend that is precisely what they are doing. They could end up rueing the day.

Atletico president Enrique Cerezo summed up the feelings of everyone at the club on Griezmann: “We have not met with Barcelona nor do we intend to do so. Griezmann’s story is pretty clear.

“At the moment we are at the same point, nothing has changed with FCB [Barcelona] on Griezmann – same as the beginning of the season.”

Griezmann is happy to have started against Real but wants more of that.

His lawyer is dealing with the situation and while there is no movement at the moment, as the president of Atletico said, the three sides know a solution has to be found relatively soon.