Why decades of Kenya police reforms have not yielded change 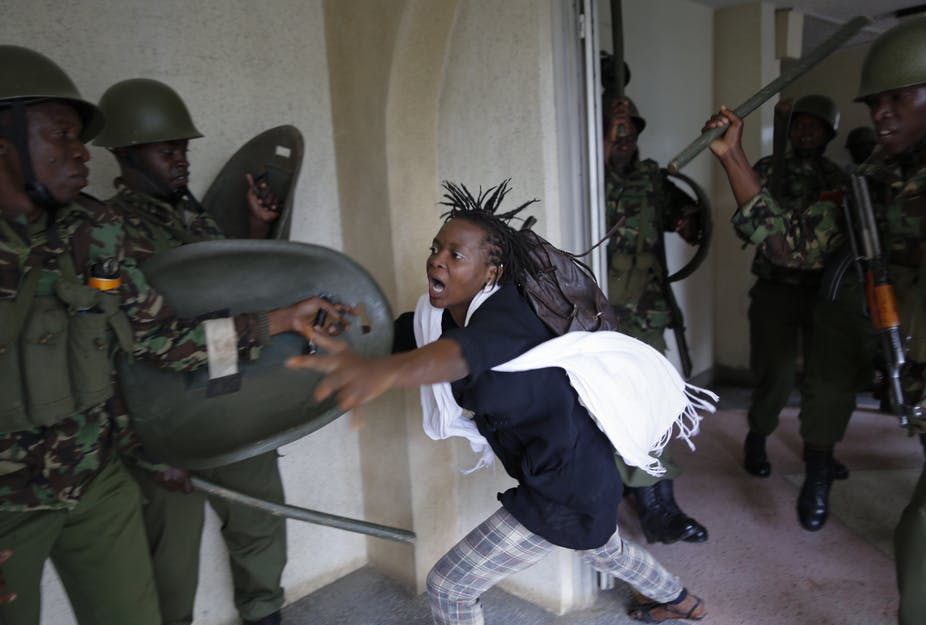 Images and video of Kenyan police officers brutalising a student during a recent protest at Jomo Kenyatta University of Agriculture and Technology circulated widely on social media and resulted in a public outcry. The officers involved were promptly interdicted and are under investigation.

In another case that has received a lot of media attention, a former police informer and five police officers were charged with the murder of a lawyer and his client. During trial a
confession by the police informer emerged revealing graphic details of the double murder.

News reports of police officers involved in various crimes also habitually surface as public scandal. And according to a recent survey conducted by the Independent Policing Oversight Authority, police abuse in Kenya showed a “significant increase” over the past six years, rather than a decline.

Several social justice centres in Nairobi also stress that police abuse has become worse. They have documented an increase in police harassment. They have reported that it’s rampant in many of Nairobi’s more impoverished neighbourhoods, where police officers habitually raid houses and execute random arrests.

All this has reaffirmed the notion among Kenyans that police misconduct is not exceptional. Rather, it is structural and part of everyday policing. This realisation is far from recent – or new. Efforts at transforming the Kenyan police have been ongoing since the early 2000s, but seem to have had minimal impact.

Last year I conducted research on police reform and I interviewed police officers stationed in various parts of Nairobi. It became evident that various forms of misconduct were interpreted as a part of everyday police work.

My findings echo scholarly research conducted in other countries that claim that the problem lies with police cultures. In some police forces a certain modus operandi cultivates and perpetuates attitudes that condone various forms of misconduct. A sense of impunity also often sets in.

As I found in my research, many police officers saw misconduct as a part of their work and some didn’t want change. Additionally, many were scared to speak out against their colleagues – a factor that’s been supported in findings elsewhere.

A range of measures, interventions, new structures and laws have been introduced over the past 20 years. The ultimate objective has been to create a democratic and accountable police service that isn’t politicised or involved in crime.

Police reform was a crucial part of a programme under president Mwai Kibaki’s government between December 2002 until April 2013. The initiatives were designed to transform the security and justice sector. At the time, many viewed the state police as functioning as an instrument for control by – and for – the political elite.

In 2004 a task force on reform was founded by the state police.

The reform programme was ambitious and encompassing. But it didn’t lead to substantial changes. This became particularly evident during the widespread violence – in which police were deeply implicated – that occurred after the presidential elections in 2007-2008. An inquiry concluded that 1133 people died and that over 400 of these deaths were the result of police actions.

In addition, two oversight bodies were created. For internal oversight mechanisms the Internal Affairs Unit was set up under the National Police Service Act. The internal unit is responsible for handling police (mis)conduct internally and, although it is supposed to act as an independent body, its director reports to the Inspector General (IG). The main goal of the unit is to receive and investigate complaints against police officers.

For external and independent oversight, the Independent Policing Oversight Authority was established. The authority is required to investigate police misconduct, especially deaths and serious injuries caused by the police, review the functioning of internal disciplinary processes, monitor and investigate policing operations and deployment, and conduct inspections of police premises.

These two oversight bodies were created to ensure that police officers were monitored in their everyday affairs.

Added to these were a range of other initiatives, such as police officer vettings and the revamping of a community policing programme. Social justice groups, along with several other human rights organisations that form the Police Reform Working Group (PRWG-Kenya), supported many of these attempts at police reform.

Despite all these efforts, police brutality continues.

Answer lies with police themselves

As my research found, several police officers said they were scared to speak out for fear of repercussions. Speaking out can lead to isolation and exclusion. It can also result in the denial of promotions or outright punishment, such as being transferred to a hardship area.

Another factor – solidarity – seems to have been in play too. The Independent Policing Oversight Authority survey also reported that police officers often cover for each other when involved in crime.

The answer to end police brutality therefore largely lies with the police themselves, from the level of top leadership to the constable stationed at the charge office. Simply stated: officers need to realise that police violence is outright bad policing.

To achieve this, a change in mindset needs to happen. This needs external support, from donors and civil society, for example. And it can be guided by additional monitoring, as is being enforced by both oversight bodies.

Yet the change essentially needs to be driven from within. Police officers need to begin to see police misconduct as detrimental, rather than beneficial. This can be promoted by, for example, revamped training curricula, yet it essentially demands inspirational leadership that penalises misconduct and sends a signal to all officers.