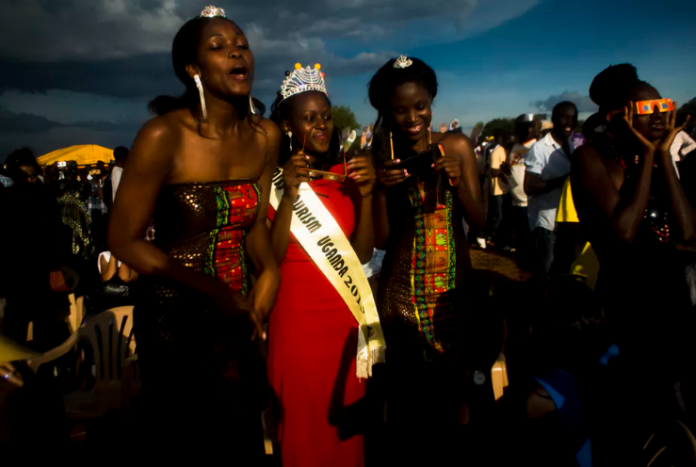 At the launch he claimed that the pageant was designed to boost Ugandan tourism by putting the bodies of curvy women on display. According to the minister, the pageant was expected to help Uganda increase the number of tourists to the targeted 4 million by 2020, from the 1.32 million received in 2017. The government is promoting tourism as a key sector to realise its ambitious economic plans set out in its national development plan.

In our view it’s also a highly questionable strategy to use women’s bodies to attract tourists.

Uganda has used similar gimmicks before. In 2016 the same minister launched the Kampala Rolex Festival. A “rolex” is a Ugandan delicacy made of fried eggs wrapped in chapati (an unleavened flatbread). They are typically sold on the roadside.

The festival was intended to boost domestic tourism but the ministry has yet to measure its impact in terms of actual numbers.

The ministry is also running a parallel campaign dubbed Tulambule Uganda. Initially it targeted female celebrities with sizeable social media platforms in the hope that they would use their influence to promote domestic tourism. The campaign has only recently recruited male celebrities.

Our view is that the beauty pageant idea is denigrating to women. Uganda has great tourist attractions such as the iconic mountain gorillas, chimpanzees, lions, and giraffes; rich diversity of bird and insects species, and cultural and heritage tourism attractions. All are undervalued and undersold but should rightly form part of a comprehensive plan that attracts more tourists without exploiting women.

Uganda’s Parliament was divided about using a beauty pageant as a marketing tool for tourism. The men legislators were more supportive of the idea than the women.

Those against the idea criticised it for objectifying women and the fact that the pageant was designed to use their bodies as tourist attractions. One analogy was that the initiative was like a zoo in which women were being placed to satisfy the tourist gaze.

The minister was accused by different sections of the society including legislators, women activists, academia and local Ugandans of positioning Uganda as an exotic tourist destination based on the attractiveness of its curvy women.

The minister had been quoted as saying,

We have naturally endowed, nice-looking women who are amazing to look at. Why don’t we use these people as a strategy to promote our tourism industry?

In our view this is an appalling exploitation and degradation of the dignity of women and girls.

Even Uganda’s President Yoweri Museveni rejected the pageant idea, and denied that it had cabinet approval.

A number of civil society organisations described the pageant as sexist and a form of objectification, sexualisation, prejudice and exploitation of women for development purposes.

Some have argued that the pageant promotes the continued marginalisation of women in an already strongly patriarchal society. A press release by the Uganda Women’s Network, an umbrella organisation that brings together women focused organisations in the country, strongly condemned the pageant.

Over the past three decades the women’s movement in Uganda has made tremendous strides in defending women’s rights. And there has been positive progress in various sectors. The biggest advances have been made in education, political engagements and representation, employment and legal rights. But a lot more still needs to be done, especially in health, resource access, and domestic violence arenas.

The biggest drivers of change have been a growing number of women-focused organisations as well as a national umbrella organisation, the Uganda Women’s Network that have been promoting gender equality and the empowerment of women.

A more enabling environment for women has also been facilitated by the pro-women legal and policy framework that guarantees the rights and dignity of women and girls. This is reflected in Uganda’s Constitution, the Uganda Gender Policy, and other affirmative action programmes.

But, there have been signs of a backlash that threatens to undo some of these positive outcomes. The proposed “Miss Curvy Uganda” is symptomatic of this push back, and it raises questions about the success of a decades long women’s empowerment movement.

We would suggest that Uganda’s marketing strategy would work better with a focus on the country’s natural and cultural diversity. Money would be better spent protecting our wildlife from poachers. The tourism ministry can also shift the tourist gaze to the richness of Uganda’s national heritage including traditional rituals, dances, ceremonies, and foods.