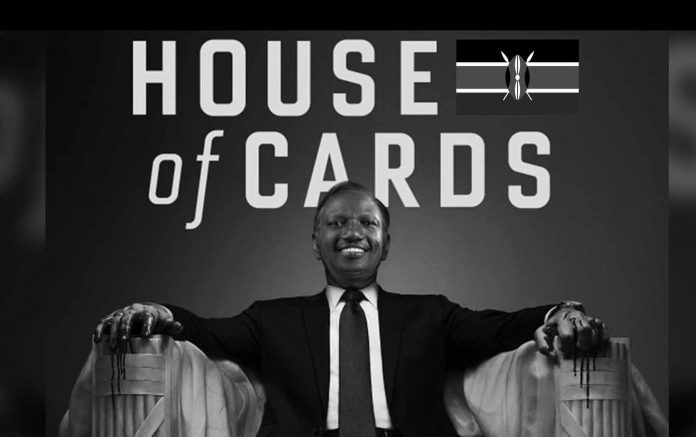 What exactly is the deep state?

Political scientists have described it as individuals and institutions that exercise power over democratically elected leadership with keen interests in the presidency.

The deep state is always keen on personal level of investment, level of interests and past behavior trends that may either protect the huge commercial business and wealth interests of the deep state.

In the run-up to 2002 elections former president Moi settled for Uhuru Kenyatta as his successor, a decision that did succeed by then.

The deep state then wasn’t threatened as Mwai Kibaki representing the National Rainbow Coalition (NARC) had assumed to be among those favored by the deep state. This is because Uhuru Kenyatta, was still ‘young’ in politics.

The Kibaki-Uhuru contest was based on experience and readiness in matters leadership, however, both being from Mount Kenya it wasn’t made to be a fierce battle as such as proven in 2007 when the same deep state prevailed over Uhuru to support Kibaki’s re-election.

In the two elections, power brokers felt safe in hands of Kibaki as their only fear was a Raila presidency who had exhibited abrasive kind of politics that threatened to bring down the system.

In 2007 Raila is said to have won the election but the system wasn’t ready for his presidency. Despite contesting the win, Raila was forced to settle for a Nusu mkate government and at the same time elevate Uhuru to Deputy Prime Minister as they still viewed him as a potential candidate for the system.

Ruto then supported Raila who was not the deep state favorite his conduct then is believed to have placed a wage between him and the deep state.

Post-election violence in 2007 landed both Uhuru and Ruto at the hague for crimes against humanity, they then both had a common battle and mission to accomplish.

The Hague cases did complicate the Kibaki succession story as the deep state and power brokers were toying around with the idea of Mudavadi presidency.

The other option was the Kalonzo Musyoka Presidency under the G7 burner.

With UhuRuto at the Hague and the Romance between abrasive Ruto and Raila over, the deep state was convinced of their ticket to the presidency as a sure bet

Even with the chapter six of the constitution on their way still, the deep state bypassed it and ensured the mobilizer king maker Ruto supports Uhuru as he had solid backing from the Kamatusa.

Once again the system installed Uhuru-Ruto to the presidency in total disregard of numbers that seemed to favour Raila Kalonzo presidency as its presumed.

In 2017 with Uhuru got favored by the deep state, garnering enough votes to cement his second term in power even after SDA Justice David Maraga nullified the election.

Raila boycotted the repeat election but the deep state held on to ensure Uhuru thrives the second term.

Ruto falling out with president Uhuru seems to have set him up against the system, in his declaration while meeting leaders from different regions talking and undermining the same system that is assumed to have raised them to power is a case of turning a blind eye on the deep-rooted reality.

The tanga tanga, a Ruto led abrasive brand of politics that most likely is anchored on settling political scores may not be favored by the system.

It’s important to note that the deep state system has intelligence report and behavior trends which they may use against Ruto, besides the commercial and international connections which they are likely use to seize power even if numbers favored him.

Currently, the deep state system has set up constitutional changes that seek to have a Mount Kenya-born successor… something that doesn’t seat pretty well with Ruto.

Early signs from the deep state have scared or toned down Ruto die hards, right from parliament to the ground.

The focus shift to Ruto allies by the deep state has already had damage symptoms with vocal supporters from Mount Kenya, Western, Coast and Gusii land either changing tone, playing silence, or shifting gears.

Raila Odinga being endorsed by the likes of Iron man David Murathe and state power dalliance puts him in a better position as his crew has alluded that missing the system had denied his presidency.

His brother Oburu doing believes the handshake has given them access to the system and would capitalize to see their candidate in the house of cards.

Ruto dismissal of the deep state system may deny him the presidency as it may not trust him.