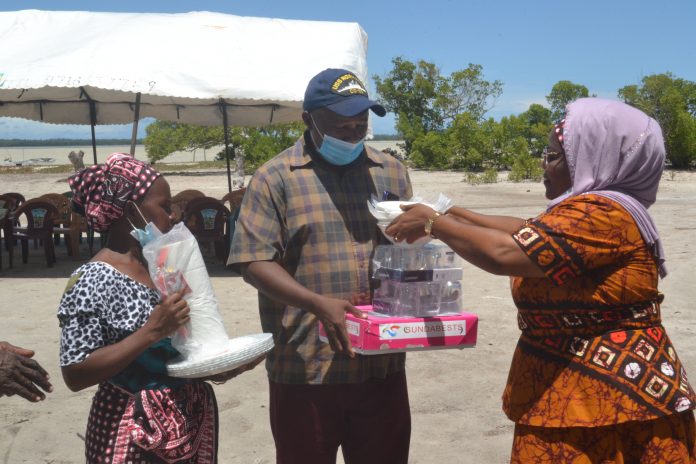 It is a dream come true for hundreds of women in Mida, Kilifi County who are members of Bidii na Kazi Women Group after an association decided to buy their wares as a way of empowering them.

The women have been conserving mangroves along the Mida creek and the fruits of the Blue economy has started knocking on their doors.

The group which consists of 57 women sold over 300,000 mangroves from their nursery they established during the beginning of the covid 19 pandemic, giving them money to supporting each other transform their livelihoods.

The group led by Arafa Salim gave out a complete set of household items to the first three women which included mattresses, pillow cases, household items to enable them to sleep comfortably and have enough items for preparing food for their families.

She lauded the initiative dubbed ‘wezesha mama nyumbani’ (Empower a woman at home) which is aimed at enabling the women to reap the fruits of conservation.

She said that the conservation of mangrove started a long time ago but the turning point was in 2019 when President Uhuru Kenyatta launched the blue economy project in Nairobi.

The patron who was among the participants in the launch said she took the initiative back home to educate the locals, society, and the women in particular.

“Wezesha mama nyumbani are the benefits we have got for conserving Mida creek, we have been doping mangrove conservation for years but 2019 KEFRI helped the women raise almost 200,000 mangrove seedlings and from that we have been doing very well,’’ she said.

She said Covid 19 pandemic killed all their efforts following the protocol to combat the virus as conservation efforts and strategies were changed and halted.

Baya said their aim is to ensure blue economy helps both the wife and husbands at home by ensuring they are furnishing and equipping the homes of members who have been doing conservation.

“We have another initiative which we will work it out which is water harvesting and sanitation, girl child education to work out ongoing back to school because most of the time when schools are open most children don’t report to school,” she said adding that they will ensure children get full uniform.

Kavumbi Kaviha one of the women conservationists was happy after receiving the household items saying she never expected one day she would get benefits of conservation.

“I got all this because of mangrove conservation had I not been actively taking part in conservation I wouldn’t be going home with these new facilities, ’she said.

Ms Kaviha who is a mother of seven said the items will help her at home because for a long time they have never seen such initiative adding that even her husband would be happy with the achievement.

Gladys Kadii a mother of seven said she was also happy because since they began there was no hope of gaining any benefits from the conservation works.

“I am so happy I do not even know how to express it these facilities will help me at home I was planning to buy a mattress for my children because it’s worn out but I will not because I have got it already,’’ she said.

Kadii who has been in the group for over five years said she began seeing the difference last year and now the fruits were being seen.

She urged fellow women to join in the conservation work as it helps in not only making the environment better but also transform their livelihoods.

Ceaser Bita an underwater archeologist from the National museums of Kenya who has been in the forefront in supporting the women in training the women on how they can initiate income-generating projects and how to benefit in conservation said he was happy to see them being empowered.

He said NMK has helped them establish the Dhow restaurant, beehive projects, canoe rides adding that their aim is to ensure they benefit from the rich underwater heritage that exists in the Mida creek.