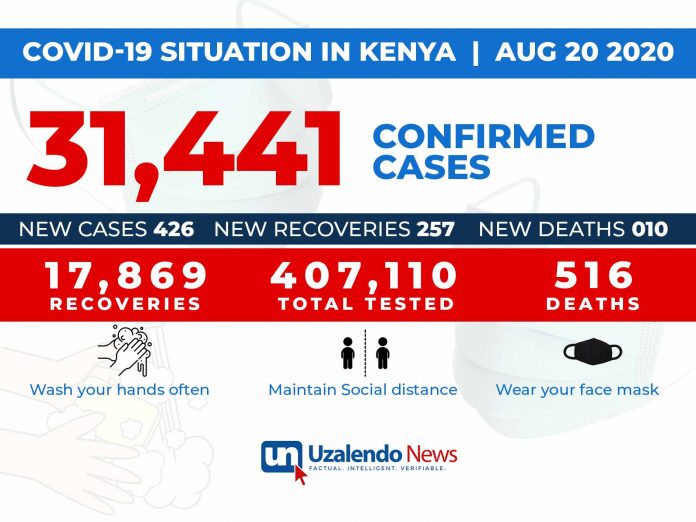 The biggest proportion of infections among Kenyans has been confirmed among people aged between 30 and 39 years – By Gerald Gekara.

This is according to a statistic released by the Ministry of Health. Dr. Mercy Mwangangi also confirmed that Kenya’s infection rate had jumped significantly to 7.9 percent, from 2 percent.

In today’s update, 426 people tested positive for COVID-19 in the last 24 hours, bringing the total number of confirmed cases in the country to 31,441.

All of the cases are Kenyan except 9, with the youngest being a three-year-old while the oldest is 88.

Kenya also recorded 257 new recoveries, with 195 of them coming from the Home Based Care Programme. Total recoveries now stand at 17,869 recoveries.

However, 10 more patients succumbed to the virus, including 3 young people. This now pushes Kenya’s fatalities to 516.

The Health CAS also confirmed that the ministry had disbursed COVID-19 funds to health workers, urging county governments to implement them to avert strikes.

She added that the ministry is doing all in its capacity to provide support to health workers, and maintain – or reduce the number of fatalities, which now stands at 2 percent of total deaths.