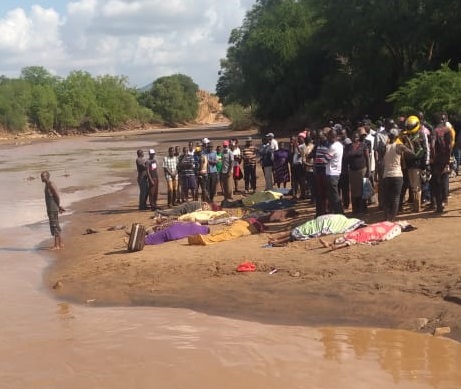 The entire Muithi Museo Parish Choir us feared to have been wiped off at the Enziu River tragedy.

The Mwingi Catholic Church choir was heading to a wedding using the St. Joseph’s Seminary bus but fate conspired to terminate their live.

The driver of the bus, Mr. Kangethe is said to be an experienced hand having been the lead Seminary driver since 2002. He is feared to be among the 39 dead passengers. Kangethe is a respected pilot in the school, which is the formation center for Catholic Priests.

The St. Joseph’s Seminary Mwingi bus was not swapped off by River Enziu as earlier feared. Preliminary police investigations say that the bus missed a driver in the deadly river causing the accident.

The accident has plunged Kitui County into grief. Two years ago, pupils at St. Gabriel School in Mwingi perished in yet another grissly accident. Kitui Senator Enock Wambua send a message to the bereaved family following the tragedy.

Wiper Leader Kalonzo Musyoka weighed in on the tragedy and urged Kenyans to exercise caution.