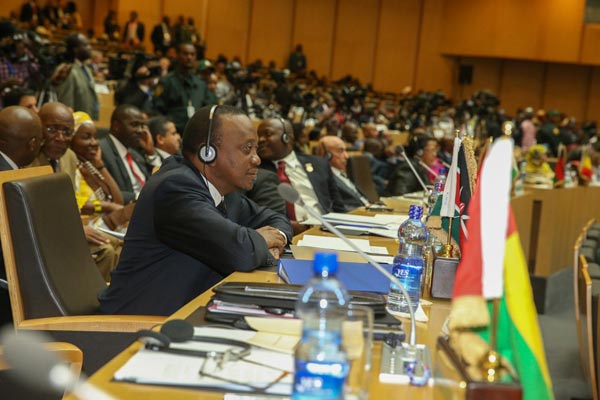 President Uhuru Kenyatta was among world leaders who today vowed never to allow terrorist elements to distabilise any country in Africa.

The leaders attending the ongoing 32nd African Union (AU) Heads of State and Government Summit in Addis Ababa discussed and strongly condemned the recent terrorist attack at the DusitD2 complex in Nairobi that led to the death of 21 people.

The Egyptian leader described the scourge of terrorism as a cancer that continues to affect African nations and destroying important structures.

“There is need to identify the sponsors of terrorism and address its root causes while putting counter terrorism measures in place,” said the new chairman during his acceptance speech that also marked the official opening of the AU Summit, also attended by First Lady Margaret Kenyatta.

The PLO leader on his part called on the world to reject all forms of terrorism, including religious extremism.

Over 700 people were safely evacuated by a multi-agency security team during the DusitD2 attack that authorities termed as a successful operation.

Other key issues discussed at the Summit included a commitment by African leaders to silence all guns in the continent by 2020, an acknowledgement of a new Africa where democratic elections and peaceful transitions have replaced political takeovers and resultant turmoil.

Several countries including Somalia, South Sudan, Ethiopia and Eritrea, DRC Congo, Central African Republic and Libya were recognized for choosing peace and initiating dialogue to resolve conflicts in their countries.

Progress made towards the ratification of the African continental Free Trade Area (ACFTA) was also praised as a major step forward and more countries were encouraged to sign up to the pact.

Outgoing AU chairman President Kagame who chaired the session said the ACFTA protocol, signed less than one year ago, stands only a few weeks to enter into full force

The theme of the summit is:“The year of refugees, returnees and Internally Displaced Persons”.

Among other objectives, the summit is exploring durable solutions over the issue of refugees in Africa, including Kenya.

President Kagame said the agenda of the summit reflects the capacity of AU to address an increasingly complex range of challenges and priorities.

While calling on African countries to increase domestic funding for health programmes, the Rwandan President acknowledged the tremendous progress made by individual states among them Kenya which is rolling out the Universal Health Coverage besides other health initiatives like the Managed Equipment Services for expanded healthcare.

He said despite the continent’s own social, economic and security challenges, African governments and people have kept their borders, doors and hearts open to millions in need.

“Africa has set the gold standard for solidarity. Its generosity is unmatched,” the UN chief observed.

World Health Organization Director General Dr. Tedros Adhanom, the first African to head the world body, said the continent can achieve much more if it unites for a common purpose.

For the continent to thrive, Dr Tedros said, it must take its rightful position in the world by initiating smart investments in areas of health and education.

He  called for increased investment especially  in primary healthcare.

The WHO boss said the establishment of the proposed African Medicines Agency will ensure reliable and safe supply of medicines to the continent and stop the proliferation of falsified medicines.

Microsoft boss Bill Gates, whose Bill and Melinda Gates has invested heavily in Africa’s health, education and Agriculture sectors said the AU can achieve its ambitions by investing in human capital.

He said every dollar invested in Africa by his foundation has a major social impact adding that he will continue investing on the continent.

The only other statue at the AU is that of Ghana’s founding father Kwameh Nkrumah who is recognised for his instrumental role in the establishment of the AU predeccessor, the Organization of African Unity (OAU).