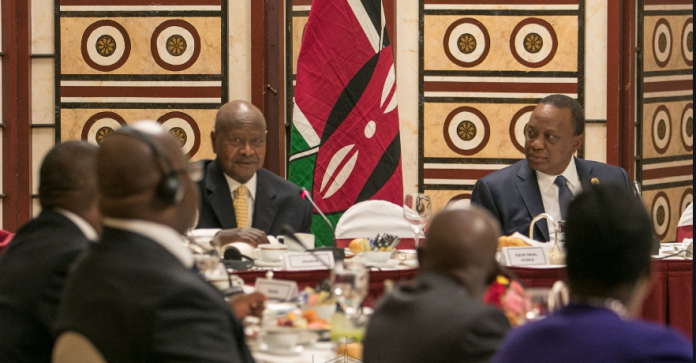 President Uhuru Kenyatta today in Addis Ababa, Ethiopia, hosted a historic meeting of world leaders on African renaissance as part of celebrations to mark the 400th Anniversary of the Transatlantic Slave Trade.

The breakfast meeting held on the sidelines of the ongoing 32nd Summit of the African Union Heads of State and Government sought to inspire a global conversation geared towards reconciliation, re-engagement and re-connection of all Africans and their descendants across the world.

The conversation also aims at mobilizing African diaspora population in the world to reconnect with their heritage in recognition of its common ancestry.

President Kenyatta said the conversation, in the spirit of Pan-Africanism, aims at producing a new framework for engagement that brings together Africa and its descendants in the Americas, and across the world for the sake of inspiration, investment, collaboration and cooperation.

As the world marks the 400th anniversary of the Transatlantic Slave Trade, it is estimated that between twelve and fifteen million African slaves were trans-shipped to America of which over 4 million are reportedly to have died on the high seas.

In his remarks, President Kenyatta said the Afro-conversation is further aimed at renewing ties between Africa and its descendants across the world.

Besides the brutal and hellish conditions that African slaves went through and the millions that lost their lives, President Kenyatta observed that slavery eventually laid the grounds for colonialism, discrimination and racism.

“It undermined families and nations, and introduced the damaging and false hierarchy of racial superiority and inferiority that continues to afflict mankind,” the President said.

President Kenyatta called for unity of purpose among Africans for the renaissance to succeed and ensure the continent retains its current status as a new frontier of global economic growth and prosperity.

“For this upward surge to be sustained for generations to come demands that we be united,” said President Kenyatta who called for the full participation of the diaspora population towards the new revival and revitalization of Africa

He said the diaspora, wherever they are in the world and irrespective of their citizenship and nationality, constitutes the sixth region of the AU

“This includes the descendants of Africa in the Carribbean , North and South America. We are one and must find paths to reconnect and reengage with one another,” he said

President Kenyatta called for practical steps and the full engagement of the AU Commission to ensure workable and clear programs are put in place to actualize the new initiative.

The Kenyan leader further called for the initiative to be embedded in the legal and institutional frameworks of respective African states and the AUC.

Leaders who spoke at the meeting among them Presidents Yoweri Museveni (Uganda), Cyril Ramaphosa (South Africa), Filipe Nyusi (Mozambique)  Hage Geingob (Namibia) and newly elected DRC Congo leader Felix Tshisekedi termed the initiative as historic and thanked  President Kenyatta for bringing the matter back to the table after it was first mooted by the founding fathers of African states in the 1950s and 1960s.

The leaders shared their perspectives on African renaissance and pledged their support for the new initiative.

African rennaissance is a concept born in mid 1940’s and is premised on an understanding that for the continent to overcome challenges facing it, its people must come together in unity of purpose.