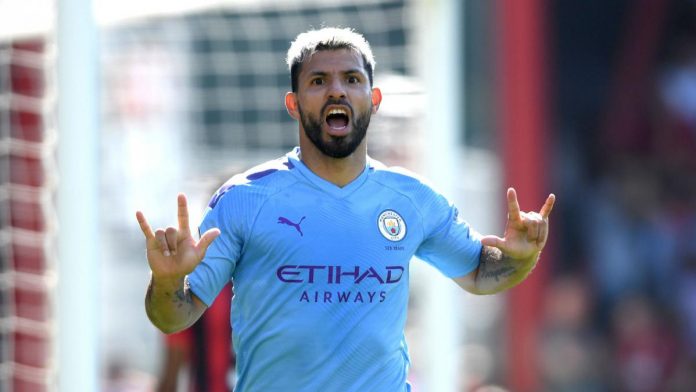 Only three players in the history of the Premier League have managed to score more goals than Aguero, who has utilised his low centre of gravity, power and instinctive finishing ability to notch 180 times.

Only Alan Shearer, Wayne Rooney and Andy Cole sit above him in the all-time standings, which also makes Aguero the highest-scoring foreign player in the division’s history.

With an 80-goal margin to make up and an increasingly uncertain future in English football, the 32-year-old isn’t going to top Shearer’s record of 260 goals but, depending on how the rest of the season plays out, he could leave with a different record of his own.

Aguero’s current goal scoring return won’t get him onto the proverbial podium of all-time goal scorers but he is the Premier League’s most prolific player according to a different metric.

Indeed, the former Atletico Madrid star has scored one goal for every 108 minutes of football he has played in the Premier League, which puts him ahead of Arsenal legend Thierry Henry (every 122 minutes) in second place, per Transfermarkt.

The revered Argentina international was one of the original pioneers of City’s revolution but looks likely to leave the Etihad Stadium this summer after ten years of stoic service.

His contract is set to expire in June 2021 and it’s looking increasingly likely that City’s all-time record goal scorer will embark on a new challenge.

Though Shearer dons the all-time record, he’s only 15th in terms of minutes-per-goal having notched every 147 minutes during his career.

Unsurprisingly, Harry Kane and Mohamed Salah are both in the top five with goals every 123 and 127 minutes respectively.

Cult hero Tony Yeboah sneaks onto the list in 25th place, while there’s an honourable mention for 17th-place Ivan Klasnic, who scored 20 goals in 3000 minutes for Bolton Wanderers.

In an esteemed ranking that is dominated by former Manchester United, City, Liverpool, Arsenal and Chelsea stars, as well as players who currently ply their trade for the established elite clubs, Klasnic represents something of an anomaly.