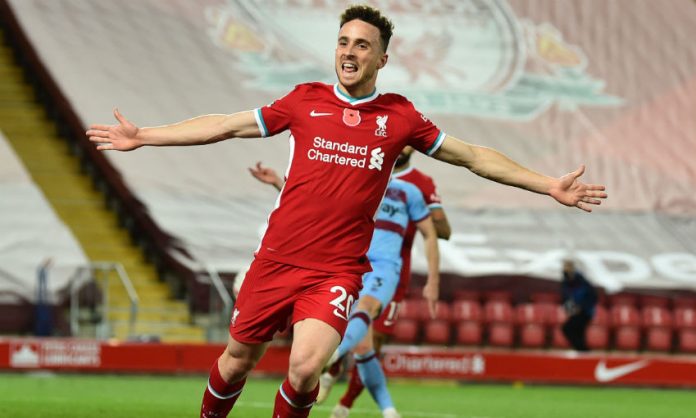 The Portuguese forward made his return from three months on the sidelines in the loss to Chelsea and hopes to get back to top form soon.

Diogo Jota is looking to inject confidence and freshness into the Liverpool squad after returning to the side in midweek.

Jota’s excellent start to life at Anfield was derailed by a knee injury picked up in the Champions League clash with Midtjylland in December.

The Portuguese made an appearance from the bench against Chelsea on Thursday and although he could not prevent the Reds slipping to defeat, Jota is hopeful his presence can act as a boost.

“I feel like I could be like a winter transfer. So that’s what I hope so they can rely on me and think I can help them in the future.

“I want to help the team and I know scoring goals is important, but at the moment we just need to all stay together because it’s a hard moment – not just for me but for the team. We all need to push from the same side and hopefully on Sunday we can get back to winning ways.

The Reds’ problems at the back are well documented and have been pored over relentlessly, and that has masked issues further up the field.

The fabled front three of Mohamed Salah, Sadio Mane and Roberto Firmino has not looked as sharp this term, and Jota was pressing for a regular start prior to injury.

Reds boss Jurgen Klopp controversially hauled off Salah during the loss to Chelsea, so Jota’s return to fitness is a timely boost.