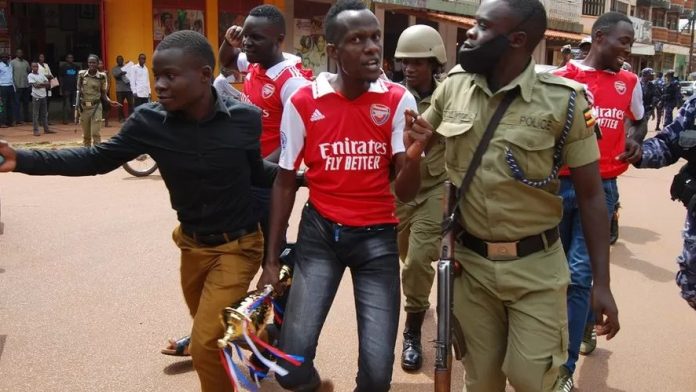 On Monday morning, at least eight Arsenal fans were arrested in Jinja, Uganda, for organizing a ‘illegal’ trophy parade in celebration of the club’s victory over Manchester United.

According to police, the unruly fans, who were wearing the club’s jersey and carrying a symbolic trophy, did not have a permit to hold the march, which is a public order offense.

On Monday morning, the Arsenal fans were traveling in a convoy of five automobiles, chanting jubilant songs and drawing public attention before being stopped by police.

“I don’t know what we have done but we were simply celebrating our victory over rivals Manchester United,” one of the arrested fans said behind bars.

James Mubi, the regional police boss wondered why they were celebrating when only half of the matches in the season had been played.

“What would happen if an altercation with rival fans broke out? They did not inform police to provide security for their procession,” Mr Mubi said.

The police boss dismissed claims that the arrest was linked to the frequent arrest of members of an opposition party who also wear red.