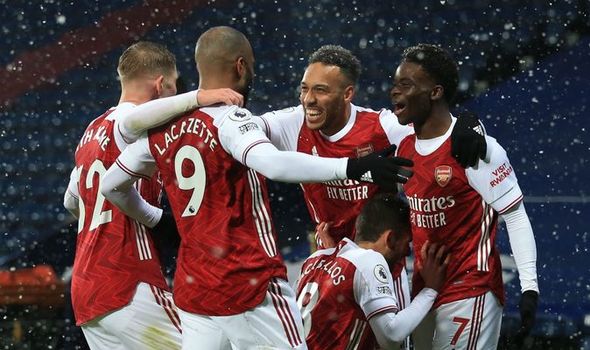 Alexandre Lacazette’s double ensured Arsenal made it three wins in a row with a 4-0 goal galore over West Brom. – By Eurosport.

In wintry conditions at the Hawthorns, Scot Kieran Tierney opened the scoring with a fine individual effort in the 23rd minute, just his second goal for the Gunners.

Five minutes later, Arsenal’s young starlets combined for a sublime second, set up by the effervescent Emile Smith Rowe, finished off by the livewire that is Bukayo Saka.

After the break, it was a matter of how many Arsenal would score, with Lacazette putting the game beyond doubt on the hour mark, before adding a fourth four minutes later to condemn the woeful Baggies to a second straight heavy home defeat, with Sam Allardyce certainly under no illusions as to how difficult a job it will be to keep his new side up.

The snow came teeming down in the West Midlands, which made conditions very difficult indeed, but an in-form Arsenal settled well, and looked the most dangerous side early on.

It took a moment of brilliance from Tierney, who fashioned a shooting opportunity out of nothing, before firing home with his right foot to open his account for the season in style.

The second was a Arsenal slick move of yesteryear, with Lacazette involved, Smith Rowe laying the ball unselfishly across for Saka to score his third goal of the season.

Just four days after their 5-0 home drubbing against Leeds, West Brom continued to be carved open at will, with their inability to clear Saka’s cross leading to Lacazette scoring for the fourth consecutive match, before the Frenchman added another after being picked out by Tierney as the pressure on Mikel Arteta lifted further.