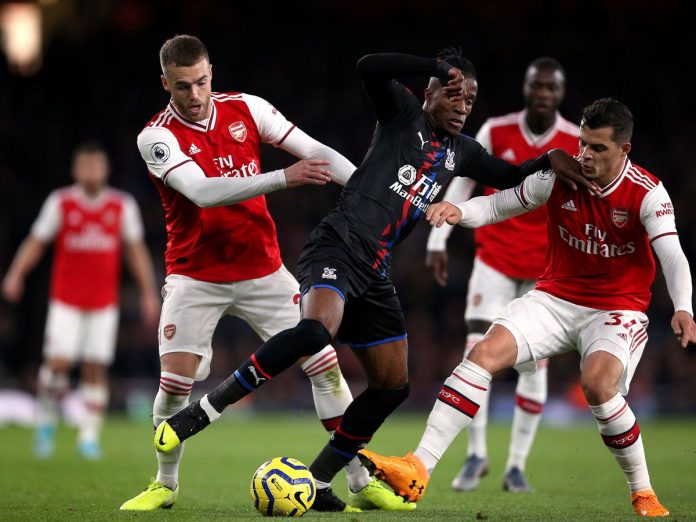 Arsenal’s recent resurgence was checked by a stubborn Crystal Palace, who claimed a hard-fought point from a forgettable encounter at Emirates Stadium.

Tagged as relegation candidates as little as three weeks ago, the Gunners came into the game off the back of four straight wins in all competitions, but were unable to find their way past the well-drilled and disciplined visitors.

For a side in such good form, Arsenal were a disappointment going forward, their best effort at goal a shot on the turn from Alexandre Lacazette into the side-netting.

Their only other clear-cut chance was an angled shot from Pierre-Emerick Aubameyang that Vicente Guaita palmed away.

There was more goalmouth action at the other end, with James Tomkins heading an Eberechi Eze free-kick against the bar and Christian Benteke drawing a fine save from Bernd Leno with a nodded effort of his own.

The point leaves Arsenal 11th on 24 points and Palace two points and a league place worse off, but comfortably clear of any relegation worries.

It was only three weeks ago that West Brom boss Sam Allardyce said Arsenal were in the middle of a battle against the drop.

To be fair to Allardyce, he had a point at the time. But that prediction has been made to look somewhat foolish by the Gunners’ subsequent three straight league wins, which included hammering the flailing Baggies.

In light of their upturn in form this result has to count as a minor blip, but it underlines the fact that Arteta’s side remain a work in progress.

Young players like Bukayo Saka and Emile Smith Rowe have added some much-needed zip and creative flair in recent games, but they were stifled here, flickering into life all too rarely against a dogged opponent.

Lacazette had scored in each of the last three league games but was marshalled well by Palace and spurned his only real chance, while Aubameyang remains frustratingly ineffective in his role on the left.

Arsenal also felt the absence of the injured Kieran Tierney and his driving forward runs from full-back.

Credit then to Palace, who had gone five games without a win before beating Sheffield United 2-0 last time out in the top flight, but now have another, deserved clean sheet.

This was not purely a backs-against-the-wall display by Roy Hodgson’s side. They sought to burst forward following transitions, using the guile and pace of Eze and Wilfried Zaha to challenge the home defence.

But for the crossbar, goalkeeper Leno and greater awareness from James McArthur, who was unable to turn in a flick on from Benteke from a corner, they would have claimed a win that would not have been entirely undeserved.

Before Thursday’s game, Hodgson described Palace’s situation – 22 points, 10 clear of the bottom three – as “somewhat comfortable”. Thursday’s point and their performance will only add to their sense of comfort.

And the good news for Arsenal is that they now have their first home clean sheet of the league season as well as the option of a fit-again Thomas Partey, who played 20 minutes after recovering from a thigh injury that had sidelined him for a month.