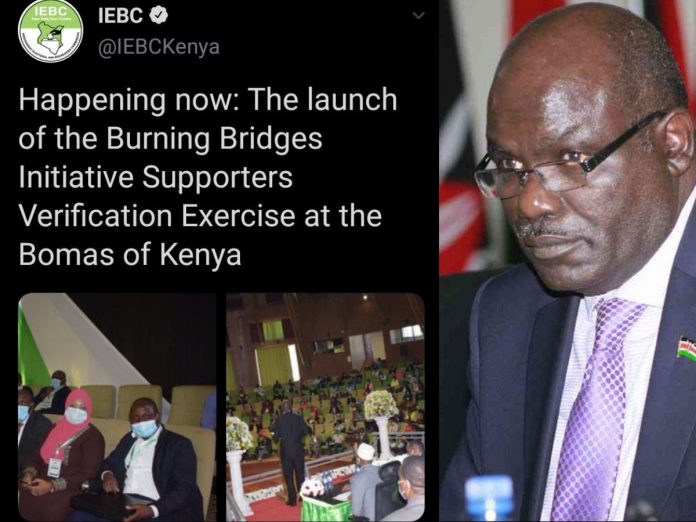 The Independent Electoral and Boundaries Commission (IEBC) has run into problems with the masses again, after an erroneous tweet concerning the Building Bridges Initiative (BBI). – By Gerald Gekara.

The commission was launching the Verification of BBI supporters.

However, while communicating the agenda of the meeting, IEBC sent out an alarming tweet.

Kenyans who were quick to rebuke the independent commission, questioned their credibility to handle the BBI signatures freely and fairly.

“Someone at IEBC deliberately called BBI Burning Bridges Initiative. However pleasing this is, l am shocked that an independent commission can openly be biased. Can they be trusted to deliver free and fair results? It is another sad day for democracy in Kenya.” Mwalimu dida, former presidential candidate responded.

“IEBC has just confirmed that indeed the purported BBI is in fact a “Burning Bridges Initiative.” The proponents should be worried. God might mysteriously influence the voters to mark the “NO” option.” Francis Ndungu tweeted.

Shortly after, IEBC apologized over the tweet, terming it as a typographic error.

“Earlier today, the Commission posted a tweet on the launch of the Verification of BBI supporters. However, there was a typographical error in the tweet which was made inadvertently. The error does NOT in any way reflect the position of the Commission or its staff. The Commission sincerely apologizes to all its stakeholders and the General Public.” IEBC tweeted.

The institution is not immune to supposed typographic errors. In May 2020, the electoral board was forced to pull down the report of the 2017 elections after it emerged that the data contained serious mistakes.

“The commission has recalled the 2017 General Election data that was uploaded on the IEBC website after a few typographic errors occasioned by massive data were noted,” the commission said.

“The corrected document will be re-uploaded and shared in due course. Inconvenience caused highly regrettable.”