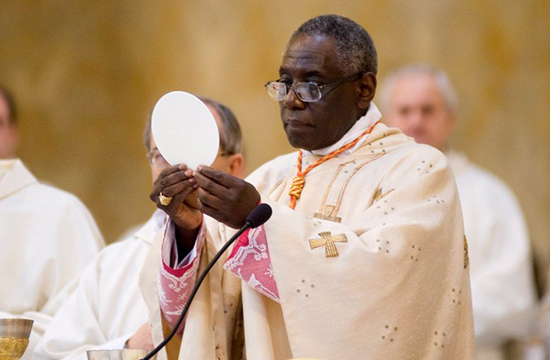 ARGENTINA – Calling it “necessary and urgent” to return to public Masses as soon as anti-COVID 19 measures permit, the Vatican’s top official for liturgy has urged Catholic bishops around the world not to let religious worship be relegated to a priority level below “recreational activities” or treated as just another public gathering.

Signed by Cardinal Robert Sarah of Guinea, Prefect of the Vatican’s Congregation for Divine Worship, the letter came with the approval of Pope Francis.

Sarah argues that although the Catholic Church should cooperate with civil authorities and adopt protocols to protect the safety of the faithful, “liturgical norms are not matters on which civil authorities can legislate, but only the competent ecclesiastical authorities.”

Sarah also insisted that broadcast and livestreamed Masses are useful, but they’re no replacement for being physically present.

Since the coronavirus pandemic broke out in March, most bishops’ conferences, following Pope Francis’s lead, closed the liturgy and other sacraments to the faithful, asking for them to be made available online and via TV and radio. Leading by example, Francis livestreamed his daily Masses from his residence at the Vatican’s Casa Santa Marta, drawing sizeable audiences on Youtube and Italian TV.

In Italy, the government of Prime Minister Giuseppe Conte greenlighted the resumption of public Masses in late May, on the advice of a technical-scientific committee that’s been overseeing the country’s response to the COVID crisis, and Francis ended his daily livestream.

READ  US Election 2020: Trump and Biden campaign in critical state of Florida

In other parts of the world, including the pontiff’s former archdiocese in Buenos Aires, Masses are still being celebrated without faithful or with extreme restrictions, which have led some critics to claim a double standard when 15 people are allowed into a grocery store but only 10 in a church.

Sarah wrote the letter on Aug. 15, it was approved by Francis on Sept. 3, and then sent to bishops’s conferences worldwide last week. The Vatican released the text of the letter Saturday.

The 72-year-old Guinean cardinal, often seen as a conservative stalwart in the Church, praised bishops and episcopal conferences for “listening to, and collaborating with, civil authorities and experts,” saying bishops have been “prompt to make difficult and painful decisions, even to the point of suspending the participation of the faithful in the celebration of the Eucharist for a long period.”

“This congregation is deeply grateful to the bishops for their commitment and effort in trying to respond in the best possible way to an unforeseen and complex situation,” he wrote.

Sarah, named by Pope Francis to his present post in 2014, titled the letter, “Let us return to the Eucharist with Joy.”

Sarah insists that when circumstances allow, it’s “necessary and urgent to return to the normality of Christian life, which has the church building as its home and the celebration of the liturgy, especially the Eucharist, as the summit toward which the activity of the Church is directed; and at the same time it is the font from which all her power flows.”

“As soon as is possible,” Sarah wrote, “we must return to the Eucharist with a purified heart, with a renewed amazement, with an increased desire to meet the Lord, to be with Him, to receive Him and to bring Him to our brothers and sisters with the witness of a life full of faith, love and hope.”

When the only Masses available are through broadcast technologies, Sarah says, “these transmissions … risk moving us away from a personal and intimate encounter with the incarnate God who gave himself to us not in a virtual way, but in a real way.”

“This physical contact with the Lord is vital, indispensable, irreplaceable,” Sarah said.

For the most part, Francis has supported the restrictive measures imposed in Italy and other parts of the world. He halted all public Masses and other events in the Vatican during the Italian lockdown, used one of his daily Masses to urge “obedience” to anti-COVID measures, and at one point even said priests who defied the restrictions were engaged in “adolescent resistance.”

In his letter, Sarah said that bishops’ conferences should give “due attention” to “hygiene and safety regulations” while avoiding the “sterilization of gestures and rites” or “instilling, even unconsciously, fear and insecurity.”

The prelate also asked the faithful to be obedient to the norms of the Church and to the bishops, arguing that this is a “sure principle in order not to err.”

READ  Tundu Lisu vows to reject results, as Magufuli is headed for a landslide win, amid fraud allegations

In May, Sarah was initially presented as a signatory of a letter penned by Italian Archbishop Carlo Maria Viganò, the former papal ambassador in the US who’s accused Pope Francis both of doctrinal error and of covering up sex abuse charges against former Cardinal Theodore McCarrick. Viganò’s letter argued that the pandemic is being exploited in order to pave the way for a one-world government.

Sarah quickly asked that his name be removed from the list of signatories, tweeting that while “I may share some questions or preoccupations raised regarding restrictions on fundamental freedom, I didn’t sign that petition.”