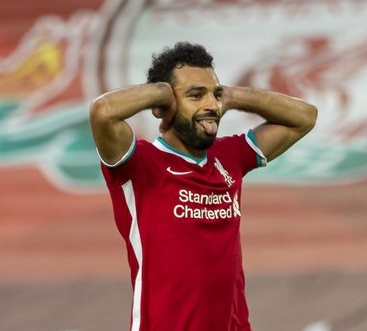 Liverpool forward Mohamed Salah bagged a hat-trick in Saturday’s 4-3 win over Leeds United, celebrating his third goal by covering his ears and facing the non-existent crowd – something fans hadn’t seen from him before.

It raised a few questions as Salah was obviously not trying to block out the noise from the empty stadium, but as it turns out, there was actually a much more affectionate meaning to his celebration.

Instead of the provocative act it usually is, this celebration was actually a tribute to former Al Ahly midfielder Moamen Zakaria, who was recently forced to retire from football after being diagnosed with Amyotrophic Lateral Sclerosis (ALS) – a disease that affects nerve cells in the brain and spinal cord – last month.

That was Zakaria’s signature celebration, and Salah took the chance to pay tribute to his ex-international team-mate during Saturday’s game.

Al Ahly players also led their own tribute to Zakaria on Friday after a 3-0 win over Ismaily SC by performing the celebration, after which Zakaria took to Twitter to thank everyone for the support.

“I enjoyed one of the most beautiful days of my life. It was one of the sweetest days in my life for almost two years,” he wrote. “I thank all fans for your prayers to me for a speedy recovery.”

Liverpool have previously raised money to support the fight against ALS after former right-back Stephen Darby was forced into retirement because of the disease in 2018, playing a charity match against another of Darby’s former sides, Bradford City.

As for Salah, he has now scored at least one goal on the opening weekend of the Premier League in each of the three seasons in which he has been with Liverpool.

He will hope to continue that momentum in Liverpool’s next game when Chelsea make the trip to Anfield on Sunday.