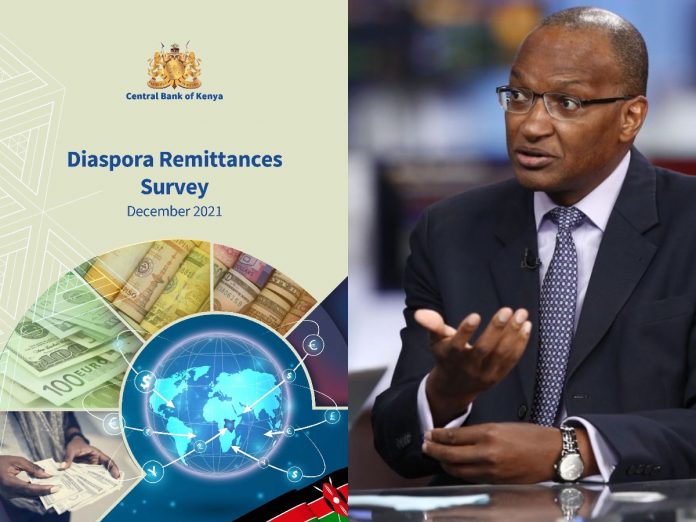 The Central Bank of Kenya (CBK) has published results of the first-ever Diaspora Remittances Survey.

The Survey was conducted from March to May 2021 aimed at collecting valuable information on remittance inflows to Kenya, with the objective of boosting the role of remittances in supporting the economy and livelihoods.

The information gathered through the Survey included: the efficiency and cost of alternative remittance channels; the difficulties in remitting cash or non-cash transfers; the availability of information to Kenyans in the diaspora about investment opportunities in Kenya; and the usage of remittances received.

Remittance inflows to Kenya have increased tremendously in recent years, with total remittances in 2021 reaching a record USD3,718 million.

This surpassed the previous record of USD3,094 million set in 2020.

These amounts are equivalent to approximately 3 percent of Kenya’s GDP. However, only inflows through formal channels- e.g., through authorized international remittance service providers in Kenya or commercial banks–are included in the reported inflows, which exclude remittances through informal channels and in-kind remittances.

The Survey therefore represents an additional step in the effort to improve statistics on remittances and in the understanding of the landscape for remittances more generally.

The key findings of the Survey include: remittances are directed at family members, who are largely self-employed, unemployed, or students.

About half of the total remitted was allocated to: investment in real estate (land and buildings) for recipients, mortgage payment for senders, and purchase of food and household goods.

The Survey also confirmed the importance of mobile money operators and money transfer companies, addition to banks, as the main channels for cash remittances. Further, the Kenyan diaspora prefer digital service providers due to convenience, promptness, and ease of access.

On average, recipients receive remitted funds on the same day, reflecting the efficiency of these channels.

Key problems that were identified included the high cost of remitting cash, and the inadequate information on investment opportunities in Kenya for the remitters.

The Survey targeted Kenyans living abroad who had sent remittances in 2019.

The respondents were reached with the support of the Ministry of Foreign Affairs and especially the Kenyan missions abroad, diaspora organizations, and other stakeholders

The Survey was conducted through an online questionnaire and attracted 1,321 respondents. We thank all stakeholders and especially the respondents for their input.