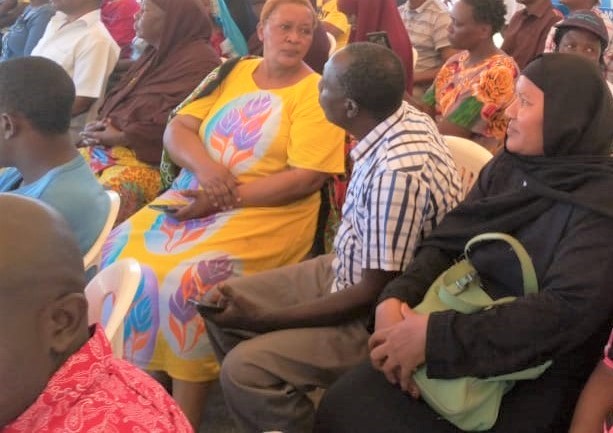 Changamwe residents listen to deliberations during a past land and house function in Changamwe-Mombasa. The locals now want the county government to digitize land details in the county.

Residents of Changamwe in Mombasa county now want the county government to digitize land information saying it will shed light on the details of the land they live in.

The locals argue that it is the only way to solve the land issue that has been a thorn in flesh to many people in Mombasa county.

According to the locals, failure for the county to digitise land has led to missing out of important land files and documents in government offices which they argue has complicated land matters.

Speaking to journalists in Mombasa, Water Opanda, the chair of Muungano wa Wanakijiji said digitisation is key in addressing the land question in the sub county

“It is important in the sense that first they will be able to understand the type of land they live in. As it is right now we do not know whether we are living in private, public or community land.

He said the problem of housing in the region is a critical issue with a high population of locals living slum areas.

Mr Opanda said that there is a need for a good planning of housing in the sub county.

“There is no implementation of the housing policies in the county. Housing is a problem not only in Changamwe Sub County but the county at large,” he said.

He said as land lobbyists they are partnered with the relevant stakeholders so that all people living in slums are accorded their housing rights.

Meanwhile, Haki Yetu Organisation Lands and Governance officer John Paul Obonyo said housing is a basic right as enshrined in the Kenyan constitution, adding that eviction of any kind should be done in a more dignified way and in accordance with the law.

Obonyo however says there is a need to involve locals living in slum areas before evicting them from their area.

He cites lack of political goodwill amongst politicians as a blow to the land and housing question in Mombasa County.

“We do not see any good will from elected leaders. The problem of land and housing is quite a big issue in Mombasa County at large,” he said.

Kipevu MCA  Faith Mwende said there is a need for the county government to digitise all the land available within the county.

She says most of the residents in Changamwe sub county cannot afford to pay land rates as most of them are living below the poverty line.

“What we need as locals is to get all the land information in one site. And this has never happened,”

On the issue of garbage waste disposal and management by the county government, the MCA said there is no proper waste management saying that for the past three months, they have witnessed mushrooming of dump waste in every corner.

“There are no waste bins,” she said.

She called on the finance department to allocate a kitty specifically to clean up the city.

“The finance department should set aside a kitty to the relevant department so that waste in the city can be managed easily. It is only in Mombasa County where we have seen strange diseases like Chikungunya, she exclaimed.

The urban housing renewal in some of the estates in Mombasa County has attracted a tug of war between the political elites with some politicians opposing the housing program by the county government.