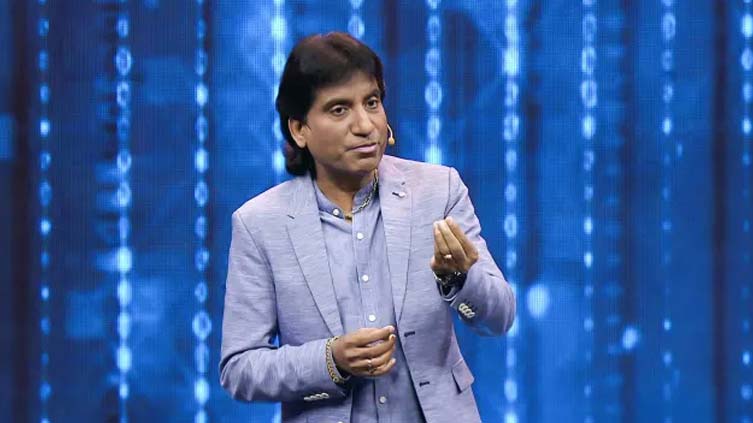 Srivastava was being treated at a hospital in the capital, Delhi, following a heart attack on 10 August.

The comedian had been taken to hospital and put on life support after experiencing chest pain and collapsing while working out at the gym.

Last week, his family said that Srivastava was recovering slowly but remained on a ventilator.

Srivastava joined the entertainment industry in the 1980s as an actor in Hindi films.

He shot to fame in 2005 after participating in The Great Indian Laughter Challenge, a reality show for stand-up comedy.

Prime Minister Narendra Modi led the tributes at the news of Srivastava’s death.

Srivastava was known as the common man’s comedian.

He was born in 1963 in Kanpur city in the northern state of Uttar Pradesh. His father Ramesh Srivastava was a poet.

As a child, Raju Srivastava developed a talent for mimicry. His uncanny ability to mimic Bollywood star Amitabh Bachchan later became well known in the world of Hindi-language comedy.

His first sketch Hasna Mana Hai (Laughter is Banned) appeared in the form of an audio cassette.

In an interview, Srivastava recalled travelling with friends in a tuk-tuk as the driver played his cassette.

“We teased him saying, ‘What are you listening to, man? Stop this and put on something good.’ But the driver responded, ‘Oh no, brother, this Srivastava makes me laugh a lot,'” he said.

In the late 1980s, Srivastava moved to the country’s film capital Mumbai to be closer to Bollywood.

He debuted as an actor in Maine Pyaar Kiya starring Salman Khan. He went on to appear in several popular films like Baazigar and Toilet: Ek Prem Katha.

But comedy remained his mainstay.

Srivastava captivated audiences as a participant in The Great Indian Laughter Challenge, and was known for his spontaneity in delivering jokes.

In one interview, he joked that he wore bright, colourful clothes because “my shows are held in fairs in cities like Lucknow and Patna, where there is a huge crowd. So when I wear these clothes, people can spot me from afar.”

Like many Indian entertainers, Srivastava also dabbled in politics.

He ran in Kanpur for the Samajwadi Party in the 2014 national election. He later withdrew from the race. Months later, he joined the ruling Bharatiya Janata Party (BJP).

On Wednesday, Samajwadi Party Akhilesh Yadav sent condolences on hearing news of his death. “He came from a poor family. With his talent and hard work he made his presence felt in the world. There are very few talented comedians like him.”