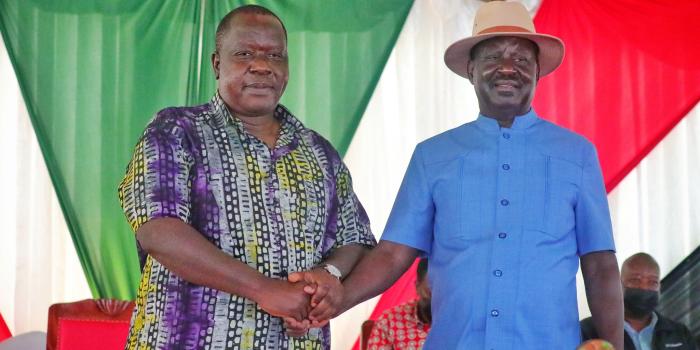 They said the March 2018 handshake had brought stability, and made it easy to carry out government functions as opposed to the Jubilee administration’s first term.

The leaders spoke on Friday at a fundraiser in aid of Mwongori High School in Borabu constituency, Nyamira County, where CS Matiang’i played host.

“Kama ni hii mambo ya siasa, when my president takes a position, I queue behind my president,” said CS Matiang’i.

Kagwe, on his part, said: “This cooperation is what we expect to see us through so that the projects that ae currently going on will not stop when the president stops, kwa sababu hiyo uhusiano ndio itaendelea mbele.”

With 291 days to the General Election, political realignments for the presidential contest are taking shape, with Matiang’i and his cabinet colleagues resolving to back Odinga’s State House bid.

“The majority of our people are where the president and Raila are,” said CS Matiang’i.

Kagwe said, “Anytime you want this nation to move and prosper, Mt. Kenya and Nyanza must be together.”

Kisii and Nyamira counties, with a combined voter population of over 825,000 according to the 2017 IEBC register, has been the epicentre of a scramble, with Odinga and Ruto squaring it out.