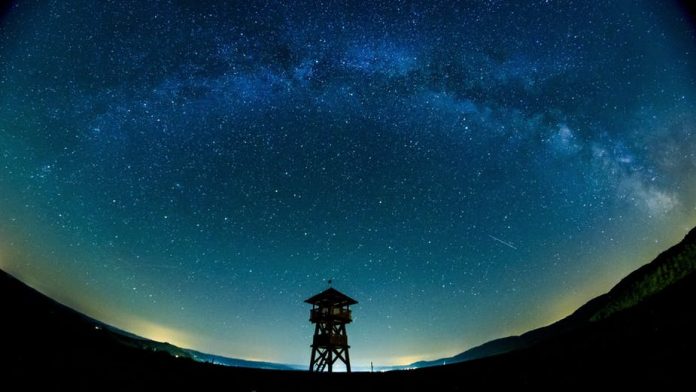 Curious Kids is a series for children in which we ask experts to answer questions from kids.

The Milky Way is the galaxy we live in. A galaxy is a system of millions or billions of stars. They’re all mixed together with gas and dust, and the whole lot is held together by gravity. As far as astronomers like me can tell, there are about one hundred billion galaxies in our Universe. There may be more that we just haven’t been able to observe yet.

The Milky Way contains between 100 and 400 billion stars. One of these is our Sun, which looks huge to us here on the ground, but is not even one of the biggest in the Milky Way.

And the Milky Way is also nowhere near being the largest of the galaxies we know about. But before I tell you how we know that, I need to explain a bit more about the Milky Way itself and how we measure something that’s just so incredibly big.

The Milky Way is shaped a bit like a Frisbee, with a bulge in the middle. This “space Frisbee” is really big: the diameter – the distance from one edge to the other – is a billion billion kilometres.

It’s hard to deal with numbers that big. So astronomers often use “light years” instead of kilometres to measure really big distances like the size of galaxies. A light year is the distance light would travel in a year. Light zips through space at 300 000 kilometres per second, so this makes the Milky Way just over 100 000 light years across.

But it’s also tough to imagine something that big. So let’s think about it another way to help put it in perspective.

If we shrank our whole solar system down to the size of a grain of sand, the diameter of the Milky Way would be about 50 kilometres.

The thickness of the Milky Way’s disk depends on where you are in the galaxy. It’s thicker nearer the centre and gets thinner as you move out towards the edge. But on average it is 1000 light years thick.

The stars in the Milky Way aren’t uniformly distributed in the disk, instead they are arranged in spiral arms stretched out from the bulge in the centre. The Earth is found in one of these spiral arms, about two thirds of the way out from the middle of the galaxy.

Big, but not the biggest

Now that you know all of these things, you’ll probably be wondering about the answer to your original question: just how big is the Milky Way?

Well, it’s actually quite hard to measure the exact size of the Milky Way from within it (which is where we are!) and scientists are always trying to improve these measurements. In fact a new study last year found that the stars at the edge of the Milky Way disk might be twice as far from the centre as we’d previously thought.

And, as I said earlier, while the Milky Way is big, it’s far from being the largest galaxy in space. Our nearest neighbour is the Andromeda Galaxy, which spans 220 000 light years. That makes it over twice as big as the Milky Way.

But they would both be dwarfed by the galaxy IC 1101, one of the largest known galaxies. It stretches across 4 million light years.

So our galaxy is big. But it’s still tiny compared with our neighbouring galaxies. There’s also lots and lots and lots we still don’t know about, which is why life as an astronomer is so exciting.

Hello, curious kids! Have you got a question you’d like an expert to answer? Ask an adult to send your question to africa-curiouskids@theconversation.com. Please tell us your name, age, and which city you live in. We won’t be able to answer every question but we will do our best.

African researchers make headway in getting decisions made based on evidence