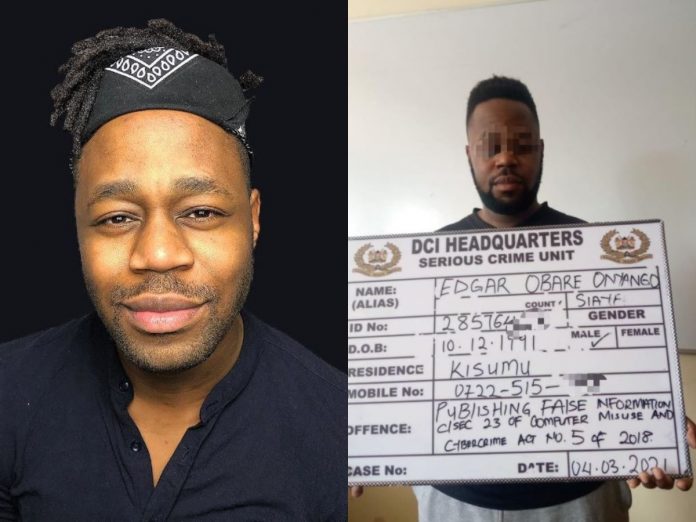 NAIROBI, 04/03/2021 (DCI) — In a case of outright blackmail by fraudsters who intend to benefit financially from prominent personalities, by tainting their images online & demanding money not to post ‘scandalous’ information about them, detectives have once again arrested serial fraudster, Edgar Obare.

The suspect who has had previous run-ins with the law for publishing false & malicious information regarding individuals and their families is once again a guest of the state.

Detectives from the Cybercrime unit have uncovered an underworld network of criminals involving young ladies recruited by Obare, to stalk prominent personalities in political, business and religious circles for monetary exploitation.

They ladies are then coached by Obare, on how to ensnare the victims into their traps then extort unimaginable sums of money from them.

In the current case facing the fraudster, one Desy Oduor Achieng his co-accused, had been coached how to stalk a prominent governor with the hope of extorting Sh.10 Million from him.

Dejected that their plan wasn’t working, Edgar took to his social media pages accusing the governor of impregnating a lady and failing to take responsibility.

The supposedly pregnant lady wasn’t aware that all along, Edgar was taking screenshots of their conversations & her photos which he posted alongside his claims. Fearing the repercussions of Edgar’s actions, she reported the matter to DCI offices in Nyali. Detectives have since established that the lady isn’t pregnant as she had claimed.

She has since been arrested alongside her tutor Edgar Obare and they will face Publishing false information charges, contrary to sec.23 of the computer misuse and cybercrime act, 2018.

Young ladies are cautioned to be wary of such fraudsters out to exploit them for their selfish gains and are advised to find alternative sources of income.