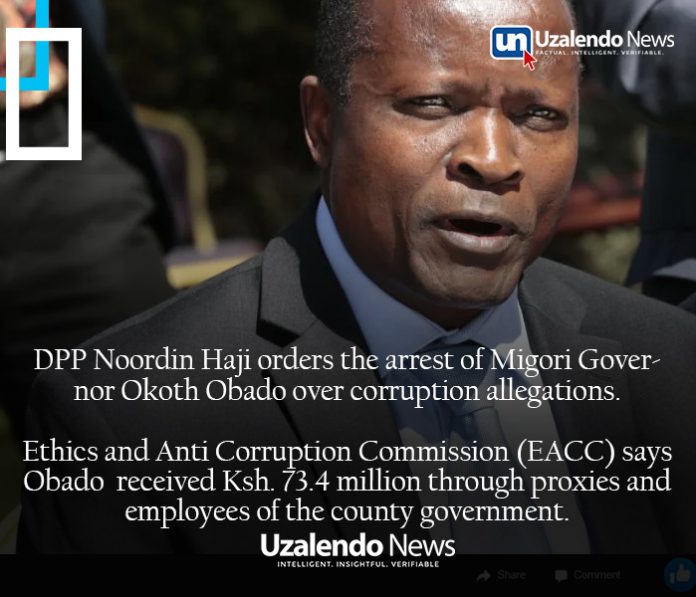 According to the Ethics and Anti Corruption Commission (EACC), Obado is said to have received Ksh. 73.4 million through proxies and employees of the county government.

Haji further revealed that Obado used companies registered to his children to do business with counties; between 2013 and 2017.

“The investigations were in respect of Kshs. 7347437690 being sums indirectly received by the Governor Migori County, through his children who received multiple payments from companies trading with the Migori County Government between the FY 2013/ 2014 and FY 2016/ 2017” read the statement.

Investigations further revealed that the Directors/proprietors of the companies/business entities were proxies of the Governor.

“3 of whom were brothers, namely; Jared Peter Kwaga, Patroba Ochanda and Joram Opala; and their mother Penina Auma Otago, and the spouse to Jared Peter Kwaga, Christine Akinyi and his sister-in-law Carolyne Onyango.” said DPP Haji.

According to the documents, the money was used to pay their school fees, upkeep, maintenance and medical bills in Australia, Scotland, and United Kingdom.

Other red flag purchases include a Toyota Landcruiser V8, and a posh mansion at Loresho Ridge.

In 2018, the EACC alleged that Governor Obado had siphoned off Ksh.2billion from the country coffers using proxies and relatives.

The investigations resulted in the confiscation of the Posh Loresho mansion, whose rent was wired directly to Governor Obado’s daughter Evelyne Zachary.

BBI Bill Finally Tabled in Parliament ahead of Referrendum vote