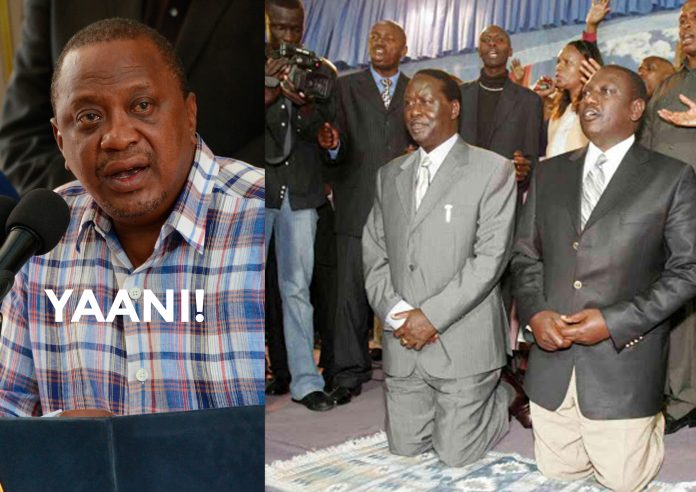 Ruto by virtue of being deputy president is expected to at least tell the country on what transpired, being the principal assistant to the head of state. By – Enock Mukoma

However, on Tuesday he took to his twitter account to condemn the dramatic arrest of three senators, for no substancial charges.

“The bipartisan Senate Committee to build win-win consensus is great wisdom and leadership. The abuse of police is wrong… very wrong. It’s not the reason millions woke up early to vote for us,” he said.

On the other end ODM leader Raila Odinga, who shoved Ruto out of Uhuru’s side also condemned the act.

In a strong-worded statement Raila seems to have camouflaged to his old ways.

“The State needs to pull back and abandon actions that take away the gains made on our path to democratization. The war lords need to stop beating the drums of war or financing the divisive rhetoric and our legislators involved in this matter need to search their souls in all honesty and put public good above private gain’’. Reads part of the statement.

Railas’ handshake with Uhuru has left Ruto in the cold. The two have jointly forced changes even in both the National Assembly and Senate.

In the spirit of placing their cronies at the helm has met resistance from a section of leaders who have turned out to be fierce critics of the government.

Weak leadership in the house

Vocal Kipchumba Murkomen and Aden Duale were both replaced as majority leaders in the senate and National Assembly respectively, with West Pokot senator Samwel Poghisio and Kipipiri member of Parliament Amos Kimunya.

Irungu Kang’ata Murang’a senator and Emmanuel Wangwe MP Navakholo took over as whips in both houses.

Hower, since the jubilee purge, their inability to whip and negotiate has forced the state into deploying uncouth measures to intimidate, threaten, and force its agenda passed in both houses. This has exposed President Kenyatta’s leadership to sharper criticism.

Further, the changes seem to have strengthened president Uhuru to deal with critics hence capturing the state without much resistance as it would have been witnessed during Raila’s protesting days

The two nemeses condemning state agencies that operate under the direct command of the president only exposes the head of state as perpetuating impunity that legislators had condemned before. They have accused the executive of leading the country back to the dark daysof detention and coercion.

However, the indirect attack by Raila to the DP Ruto in the statement is an indicator of political interests that both camps are keen to achieve as the clock ticks towards 2022 and the succession politics in play.