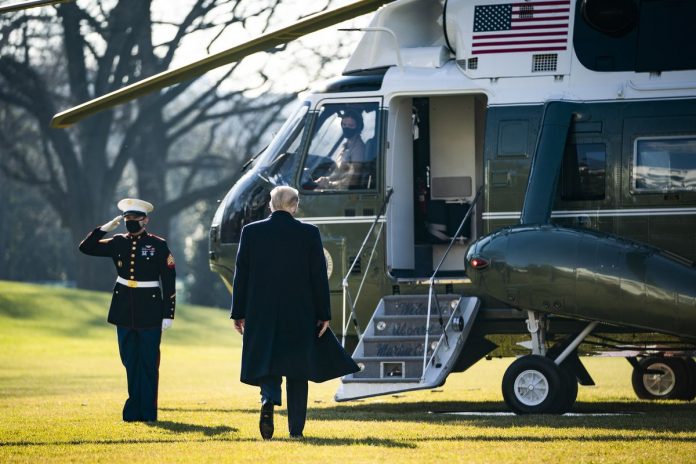 In one last divisive spectacle before exiting the Oval Office, President Donald J. Trump became the first chief executive in modern US history to forgo the tradition of attending his successor’s inauguration.

Instead, Trump opted for a departure ceremony that left the self-styled larger-than-life business tycoon-turned-president appearing small and as alone as ever.

Four years ago, Trump delivered his own inauguration speech, promising an end to what he called “American Carnage. ” During his final remarks as president, however, Trump seemed incapable of his escaping his role in instigating the mob violence at the Capitol on January 6, a day that will forever stain his legacy.

After he finished speaking, Trump began to exit the stage, then turned around to shake hands with Meadows, the highest-ranking White House official other than the President attending the departure ceremony, as Vice President Mike Pence chose to honor the American tradition of participating in the transfer of power taking place back in Washington.

In one final sign of the fractured relationship between Trump and Pence, the vice president also did not appear for the President’s final departure on Marine One from the South Lawn of the White House.

The outgoing President boarded Air Force One at approximately 9 a. m. ET for his last flight as commander in chief along with a small contingent of White House officials and staffers who plan to work for Trump during his post-presidency.

Several former administration officials and White House advisers said they declined to attend Trump’s departure ceremony out of disgust with the outgoing president.

“Don’t end up like Trump because of your lies,” the adviser said.

Following Trump’s arrival in Florida, reporters made one final attempt to shout questions on the tarmac, during the ex-president’s final minutes in office.