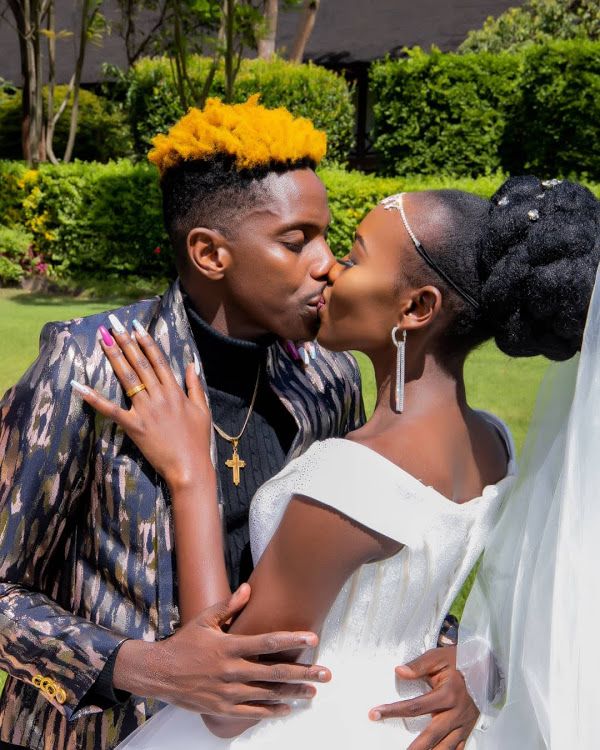 On Tuesday Eric announced his marriage to Carol Kamweru who won the wife material show .a video of the two exchanging vows was shared on social media and netizens were quick to question whether the wedding was real or it was just a publicity stunt.

People also went on to question why the family of both parties were not present and the person officiating the marriage was not a priest and that also the two were not seen signing the marriage certificate.

When Eric was asked he said that the marriage was real and that it was held at a private venue with close family and friends. “People are used to the normal culture and traditions but all my life has been extra ordinary I have always done things in a different way. “

“I know people can’t believe that I have taken this approach but this is legit and we have a marriage certificate and the vows we took were conducted by an ordained priest.”

People present at the ceremony include his brother Fred Omondi, Bonfire CEO Simon Kabu and Becky Sangolo the other band mate to Carol.

Comedian Eddie Butita confirmed that the two had done rightfully by the traditions by going to see the parents and also paid bride price .and hence making the marriage official.

“Fairytales do happen you have come into my life and completely changed it for the better I can’t wait to spend the rest of my life with you.” said Carol on her Instagram.

But then later on Shakilla stormed at the wedding to make a scene. But what makes this whole story seem like it was scripted is because Shakilla may have been wearing a mic because a recorded video normally of someone who is not wearing a mic the voice would be totally different.

Eric said he is not looking to marry another wife.