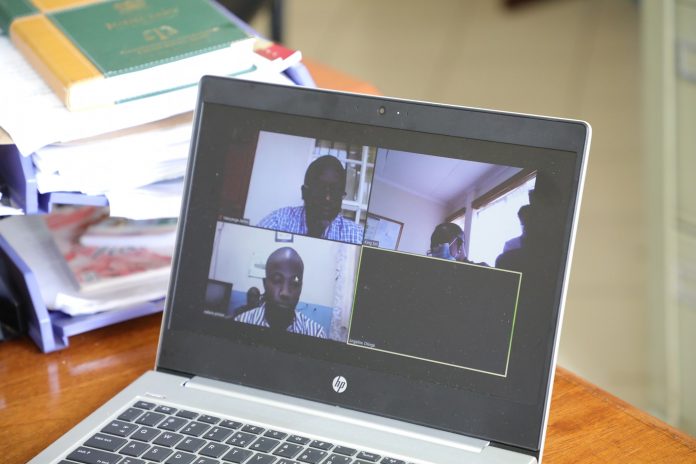 Well-wishers on Thursday donated three laptops to the main GK prison in Malindi to help in digital case hearing during this period of Covid 19 pandemic and digital migration. – By Ramadhan Kambi.

It is a good step forward and a boost for the Judiciary in Malindi after the donation of the three laptops by Tracom services a company associated with renowned business men Amon Kiarie and Paul Njau.

The duo offered them through the Progressive Welfare Association of Malindi PWAM in which they are members.
They were officially handed over to the Malindi resident Judge Justice Reuben Nyakundi together with Conrad Masinde the Kilifi County Deputy Probation Director, and the Deputy Malindi GK Prison Boss Peter Mbuthia at the board room of the law courts.

Justice Nyakundi said the donation was done at the right time when the judiciary was migrating to operate digitally fully and would go a long way in speeding up the dispensation of justice.
He added that despite the challenges, the little resources have to enable them to handle cases virtually which reduces congestion in the law courts.
“This donation will be of real support in the dispensation of justice, and we are very grateful for,” he said.

Mr Masinde who is also secretary of the Kilifi County Court Users Committee of the high court said since the covid-19 pandemic, courts moved to virtual hearing of cases with all matters being conducted virtually.
He said the virtual hearing came with a challenge in terms of ICT as they realized Malindi GK prison is serving several courts including the Malindi high and the lower court, and also Garsen court.

”If we have several screens in court but at the prison, we only have one laptop, there is a jam on how maters are heard, so our members decided we needed to address this issue,” he said.
He added that PWAM which is one of their main collaborators in Malindi came out and promised to intervene on these challenges.

The laptops will be given to Malindi GK Prison which will enable five courts to run smoothly and reduce the jam that was being experienced before.
”The move will go along in ensuring service delivery is effective to the people of this country,” he said.
currently, the Malindi prison has five laptops which are not enough as the Malindi law courts have five lower courts, the high court in Malindi and Garsen, and two lower courts.

“We currently have a shortage of three laptops which if shall be availed will enable all courts to run simultaneously without causing any jam,” he added.

”We are quite grateful this is a challenge but with the support from our progressive members we are heading where we want,” he added.
Another challenge he said was the issue of data bundles as previously the prison was using data bundles but revealed that they spoke with one of the internet service providers who already did a survey with a view to fixing the problem.

In future, he said plans would be to ensure virtual sessions are also held even in police stations for suspects to be charged and given bond without necessarily going to court.
The Malindi Deputy Prison officer said it was a great day to receive the laptops from the CUC members in Malindi which will address the backlog which was being experienced for some time in the North Coast.

Mr Mbuthia said Malindi GK Prison receives inmates from the entire North Coast Including Lamu, Tanariver Kilifi, Kaloleni and again it was the only quarantine center.
He said with enough laptops it will enable virtual cases to be heard in time without any hitches.
“For the inmates, the institution and the judicial system this is a positive move as the cases on the records will be heard in time,” he said.

Due to the Covid situation, he said the remands have the majority numbers since very many cases have been on hold during this pandemic.
With the gifts, Mbuthia said he will be able to mobilize for courts to handle cases of remandees so as to speed up the hearing of their cases.
“Previously we had only one curt running in session, but with the three laptops four courts shall be able to run at the same time,” he said.
Also present during the event was PWAM Chairperson Kate Mwikali, and senior lawyer Tukero ole Kina who is also a member.

DCI moves to tame students after upsurge in crime