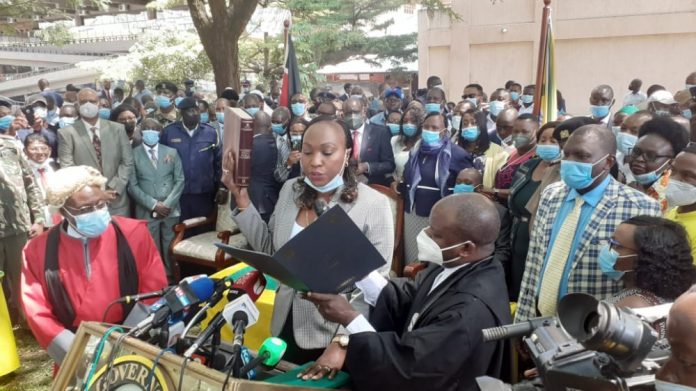 The dramatic swearing in of Nairobi’s deputy governor Ann Kananu has been met with backlash as lawyers, ordinary citizens equally fault the judiciary for breaking the constitution. – By Gerald Gekara,

Kananu was hurriedly sworn in shortly before 2pm amid claims that she will likely take over the mantle from acting governor Benson Mutura.

However, shortly after the swearing in, a petitioner moved to the Judicial Service Commission (JSC) seeking to have High Court Judge Anthony Mrima reprimanded.

One Mr Henry Shitanda filed a petition with the commission challenging the judge’s ruling on a case which sought to have the vetting of Nairobi Deputy Governor Anne Mwenda Kananu stopped.

Other groups such as the Kenya Human Rights Commission have vowed to challenge the swearing in of Nairobi Deputy Gov Ann Kananu.

The move that was mirrored to the flawed swearing in of former President Mwai Kibaki, has been marred with several instances on abuse of the constitution.

Legal experts argue the vetting process was to take place in two weeks, in this case Ann Kananu was vetted and sworn in 1 day.

The ascension to power has been challenged over the forthcoming by-election to replace the ousted governor Mike Sonko.

IEBC has since remained mumb on the February 18 elections.