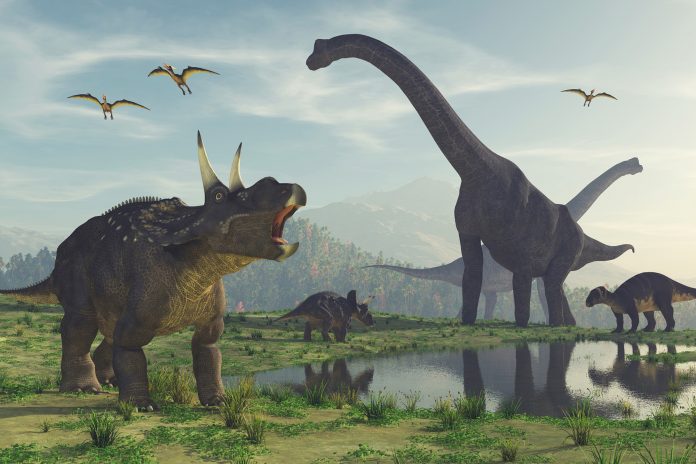 We’ve all heard of state flowers and state birds, but Massachusetts is stepping it up by proposing a state dinosaur.

“I was unprepared for the excitement that this project would generate,” said Lewis, adding that tens of thousands of people have already voted in a poll to choose the dinosaur.

Massachusetts is far from the first state to adopt an official dinosaur.

The number changes a bit depending on how the dinos are counted — nine states and DC have official state dinosaurs (Arizona, Arkansas, California, Maryland, Missouri, New Jersey, Oklahoma, Texas, and Wyoming), while six have state fossils that happen to be dinosaurs (Colorado, Montana, New Mexico, South Dakota, Utah and Oklahoma).

A decade later, New Jersey went all in and coined the term “state dinosaur” by adopting the Hadrosaurus foulkii as one of their official symbols.

Before Massachusetts citizens can adopt a dinosaur of their own, they are being asked to decide in a poll which of their state’s “oldest constituents” to designate: Podokesaurus holyokensis or Anchisaurus polyzelus.

“Dinosaurs already serve as a gateway to science for many young people,” added McMenamin, who is one of the paleontologists working on the project to adopt a state dinosaur.

“As we move forward with naming a state dinosaur, kids will learn the names of dinosaurs that lived here in Massachusetts.

“While they aren’t the largest dinosaurs to roam the planet, they begin to tell the story of how dinosaurs came to rule the Earth,” says the state dinosaur poll, which is open to Massachusetts residents and those with close connections to the Commonwealth.

“Ultimately, if this exploration of a ‘state dinosaur’ helps even one person make contact with their local elected officials, and if that contact is helpful down the road, this would have been all worth it,” Lewis told CNN.