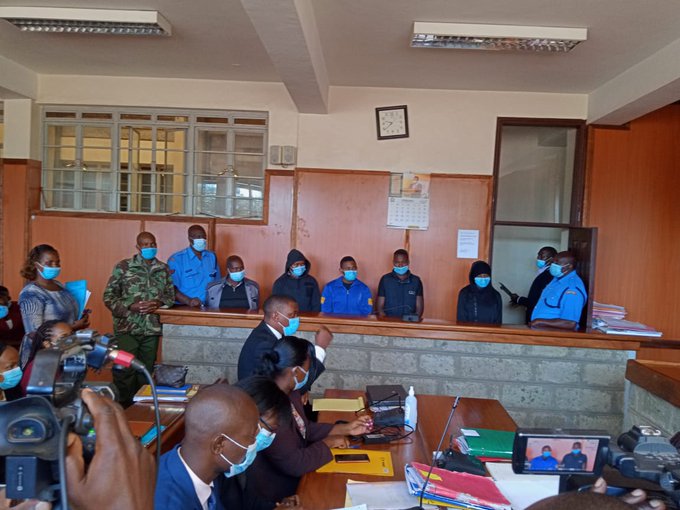 Five people accused of the murder of Nyeri businessman Daniel Mwangi Wangondu are set to appear at the Nyeri High Court on Tuesday midday..

The Directorate of Criminal Investigations (DCI) established suspects who had been hired by the deceased’s father in December to murder his son where they were paid Sh160,000.

The suspects include Mwangi’s father,Stephen Wangondu Kinini, James Mahinda Mwangi who is a driver to the deceased’s father and was traced to Nairobi’s Githurai area where he was arrested on Saturday, February 20, 2021.

Upon interrogation, he led officers to Matakani area in Embu where two other suspects, Geoffrey Waturi and Eddy Kariuki Ngari,who were also arrested and the trio escorted to the RCIO’s offices in Nyeri. Raphael Wachira Kariuki was also arrested after a man hunt as he had run into hiding.

This came after residents of Wendiga village in Mweiga Nyeri county took to the streets on Thursday last week demanding for justice for the 32-year-old man reportedly murdered by assassins hired by his father, Stephen Wang’ondu Kinini, in what detectives believe was motivated by insurance money.

Mwangi’s father is said to have started processing compensation claims from an insurance company barely 12 days after the burial of his son.The 32-year-old Mwangi, was killed by unknown people outside his house as he returned home from a New Year’s party.

Mwangi, a businessman then dealing in agribusiness, had left his car outside his gate and jumped over the fence to open the gate from inside. The attackers, believed to have been hiding at a bush near the house, followed Mwangi into the compound and stabbed him multiple times. They took nothing from him where they left his body on a pool of blood at the gate to his house where it was found later that night.

Detectives are also investigating the death of Wangondu’s other son, Emmanuel Thuita Wang’ondu, who died in 1995 and was then a Form Three student at Kiaganja Secondary School in Nyeri County, where he was said to have drowned in one of the dams in Wang’ondu’s expansive farm.

A few days after Thuita’s death, Wang’ondu is said to have lodged a compensation claim with an insurance company with which he had insured members of his family and property.