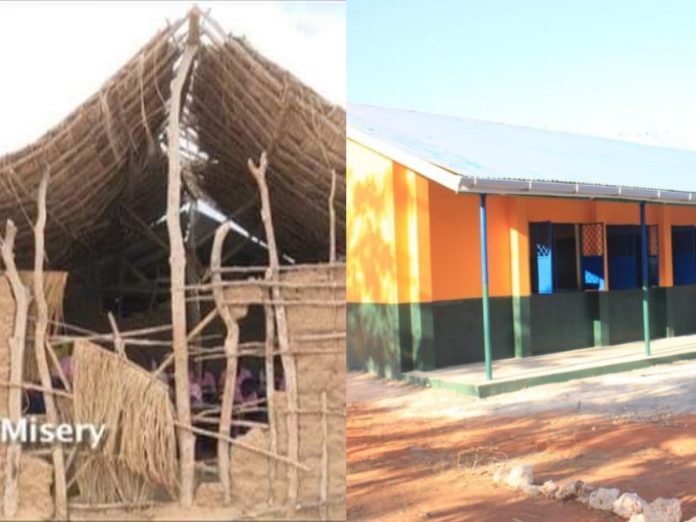 A Ganze school in Kilifi County that caught the eye of reporters due to its sorry state in 2016 has now a lease of life. – By Ramadhan Kambi.

Donors and the government are all flocking to assist the school, bringing up modern buildings that have totally changed its face since it was highlighted.

Misufini primary school in Sokoke ward was among the schools that were featured in the ‘Schools of Misery’ by NTV. But the documentary has turned out to be a blessing in disguise as donors and the NG-CDF flock to the school to address the challenge.

On Monday, Ganze MP Teddy Mwambire handed over five classrooms that were constructed by through the Ganze NG-CDF.

“The state-of-the-art classrooms with twenty brand new desks in each have made the learning institution be the first one in the constituency to have sufficient and classic classrooms which have both wiring and water harvesting as the new design for the Ganze NG-CDF,” the MP said in an interview with Uzalendo News.

Mr Mwambire said that he will continue to utilize the limited resources to make sure that some of the dilapidated classroom buildings in the region get a facelift and new projects launched.

“My focus is to serve the people of Ganze and make sure that we address the infrastructure in our schools. I understand that the resources we get might not be enough to meet the infrastructural challenges in our school but holding hands with each other will make this dream come true,” he said.

He thanked the Project Management Committee, school administration, community, the NG-CDF and all those who worked around the clock to make sure this happens.

“It’s my great hope that we will keep on walking and working together for the betterment of our great constituency,” he said when he addressed the parents.

The completion of the five classrooms comes only a month after the school received another two classrooms built through Tungule Foundation, run by Kenneth Kazungu.

Speaking when he official handed over the classes to the school administration, Mr Kazungu who works at the Kilifi County government as chief officer in charge of roads and water said that said that his was touched by the plight of the pupils when their story was aired and decided to lend a hand as a resident of Ganze.

“Our children need a good learning environment so when I learnt about the poor state of the school, I decided to construct two classrooms as a remedy to address the situation,” he said.

The school has also received four classrooms from Asante Africa, an NGO working in Kilifi County.