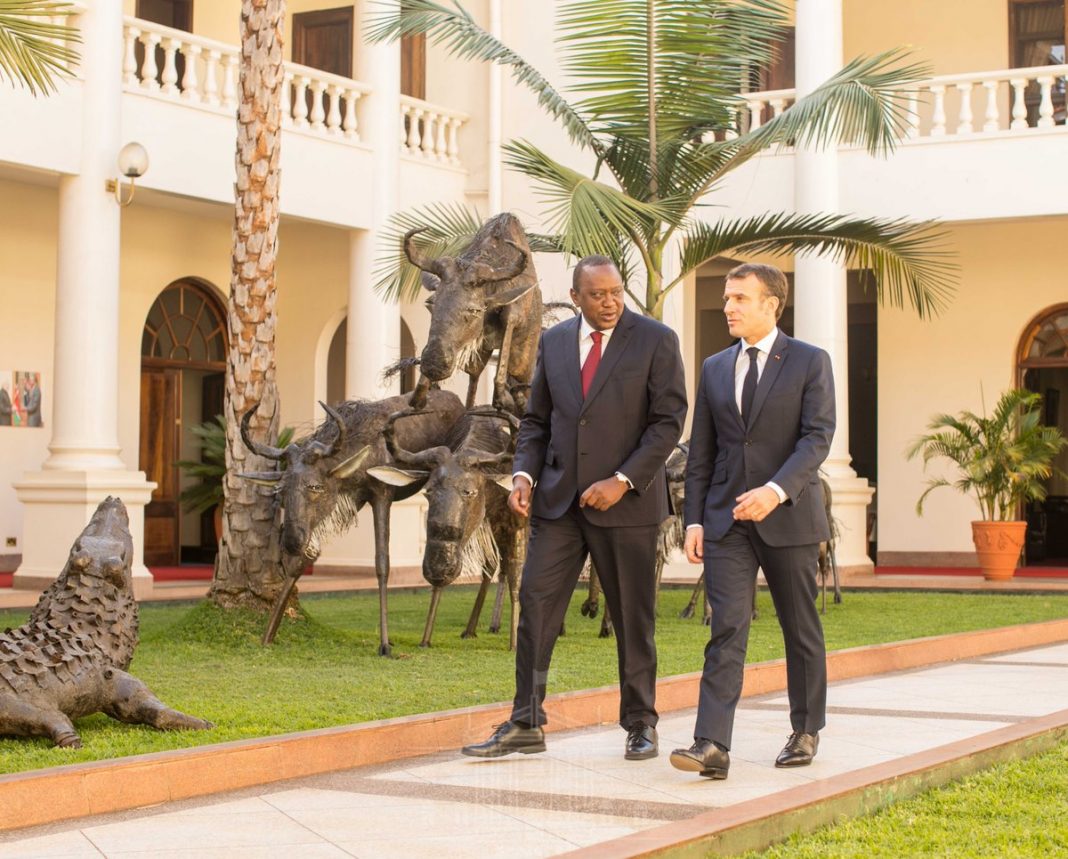 Speaking when President Kenyatta hosted a State Banquet in honour of the French leader, who is in Kenya for the first State Visit by a French Head of State, President Macron said he believes in the Kenyan leader’s vision for a fully integrated Eastern Africa.

The two Presidents were also joined by President Felix Tshisekedi of the Democratic Republic of Congo during the dinner held inside the historic Karura Forest, the only indigenous forest in the middle of a city.

“We do believe in your strategy of building a new vision to bring peace and stability not only for Kenya but for the whole region,” said President Macron in his speech. “I want France to be part of your regional agenda. You are a champion of regional integration and we support you,” he added.

He said the EAC is one of the most integrated regions in the world and that France supports the agenda to achieve full integration in the region.

“What you want to build for East Africa and Central Africa is feasible,” President Macron said.

He said Kenya is a world leader and a reference for many nations in various fields including innovation, environment, scientific research and support for humanitarian efforts.

President Macron said France wants to strengthen its partnership with Kenya, noting that in the past the French business community has been more perceptive than the French government in its relations with Kenya.

He said Kenya and France have already signed deals worth more than three billion Euros during his visit.

Earlier in the day, President Kenyatta and President Macron launched a Peugeot car assembled in Kenya targeting the Kenyan and regional markets.

The two Presidents also toured the Nairobi Central Railway Station and spoke on the planned construction of a commuter rail line that will connect the Nairobi Central Business District and the Jomo Kenyatta International Airport. The rail system will be built in partnership with a French Consortium and is expected to be completed in two years.

President Kenyatta said Macron’s visit was historic since it is the first by a French President to Kenya.

He said Kenya and France share world views and are increasing their partnership in development as well as security.

President Kenyatta said France is a key trading partner of Kenya and encouraged business communities in both countries to strengthen their ties to create a sustainable trading environment.

He thanked the French government for its support towards Kenya’s development agenda especially the Big Four Agenda.

“This visit will give our nations new areas of cooperation,” said President Kenyatta.

While speaking about the venue of the dinner, President Kenyatta paid tribute to Nobel Laureate Prof Wangari Maathai who is credited for the continued existence of Karura Forest thanks to her brave fight to save the environment.

“I am happy to host you at this sanctuary we call Karura forest. It is the only indigenous forest in any capital city anywhere,” said the President.

He said it is because of the power, voice and bravery of Prof Maathai that Karura Forest still stands inside the city of Nairobi.

The dinner was attended by Kenyan and French dignitaries. Former Prime Minister Raila Odinga was among the Kenyan guests at the dinner. The delegation accompanying President Macron included three ministers, six parliamentarians and representatives of major French companies.