..
Home International G7 throws up plenty of controversy and debate, but little compromise 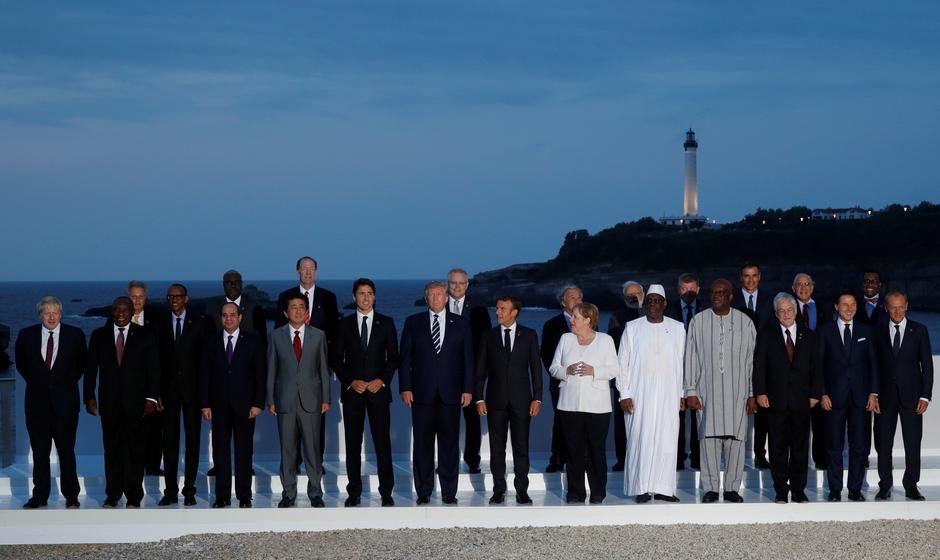 Prime Minister Scott Morrison has had a busy fortnight of international diplomacy. Barely had the dust settled from his performance at the Pacific Island Forum in Tuvalu, than the prime minister announced troop commitments to the Straits of Hormuz, then fronted a delicate press conference in Vietnam speaking about the South China Sea, en route to France.

Read more: Infographic: what is the conflict between the US and Iran about and how is Australia now involved?

After a year in the top job, Morrison may be slowly understanding what it takes to make an impact at a global level in order to pursue Australia’s interests.

Morrison scored a rare and valuable invitation to the 45th Group of Seven (G7) Summit in Biarritz, France. The G7 membership consists of the industrialised economies of US, France, Germany, Japan, the UK, Italy and Canada, along with the Presidents of the European Union and European Commission, and usually Spain. The World Bank, IMF, OECD, African Union, ILO, African Development Bank and NEPAD are also usually invited, the UN Secretary-General was also there.

The G7 used to be the G8, but Russia is still suspended. On March 24 2014, the G7 members cancelled the planned G8 summit that was to be held in June that year in the Russian city of Sochi, and suspended Russia’s membership of the group, due to Russia’s annexation of Crimea. However, Russia has not been permanently expelled.

French President Emmanuel Macron used his invitations strategically to promote a “league of democracies” concept. He invited leaders from Australia, India, Chile and South Africa to join the outreach activities at the summit, in particular to attend a Sunday night dinner to discuss environmental challenges.

Australia is a member of the G20, which includes India, Indonesia and China. But it has often cast a wistful eye to Canada’s participation in the G7/8, despite the relative similarity in economic strength between the two nations.

This year, the Henry Jackson Society released its second Audit of Geopolitical Capability report, which assesses the geopolitical capability of the Group of 20 nations plus Nigeria. It ranked Australia as the eighth most capable in the world, ahead of India and Russia.

But since the election of Donald Trump as US president, the G7 has lost much of its consensus and related power. The 2019 summit was like an Agatha Christie play, full of shocks, tensions, surprise reveals and difficulties.

The US president walked out early from last year’s G7 summit in Canada over criticism of his tariffs policy, and then refused to sign the final statement. Macron therefore organised the summit to have a two-hour lunch alone with the president, and abandoned the idea of a final communique.

Saturday working sessions were held on jobs, global inequality, climate change and women’s empowerment, leading to criticisms from the US delegation that the agenda was too “niche”. Sunday was devoted to the extremely difficult trade discussions and the Amazon forest fires.

The European G7 nations, as well as other EU members such as Ireland and Spain, sparred over whether to block the EU-Mercosur free trade agreement unless Brazilian President Jair Bolsonaro takes forceful action on the forest fires raging in the Amazon and on climate change in general.

Read more: The Amazon is on fire – here are 5 things you need to know

Trump pulled out of the Paris Climate Agreement in 2017, shortly after he attended his first G7 in Italy. Climate was still a sticking point at this summit, with leadership from the G7 unlikely on climate as an economic risk.

The Saturday dinner was thrown into uproar by Trump championing the re-entry of Russia to the G7, with the EU arguing back that Crimea would be better.

Sunday saw the surprise arrival of Iranian Foreign Minister Mohammad Javad Zarif to meet with Macron. Zarif, sanctioned by the US, said salvaging the 2015 nuclear deal would be difficult but “worth trying”.

Trump withdrew the US from the Iran nuclear accord in 2018, leaving European signatories scrambling to preserve the pact. German Chancellor Angela Merkel said she welcomed efforts toward deescalation. Europeans have so far declined to join Australia, the US, Bahrain and the UK by engaging in the Strait of Hormuz. The situation in Hong Kong was barely raised.

Just before the summit, UK Prime Minister Boris Johnson – attending his first G7 summit – and European Council President Donald Tusk traded barbs over the UK’s exit from the European Union. Tusk said he would not negotiate a no-deal scenario, and said he hoped the prime minister did not want to go down in history as “Mr No Deal”. Johnson took a swim in the sea and created a lengthy metaphor for journalists about Brexit as a result.

Most world leaders attending the summit declared they would ask the US to resolve the trade war with China. However, Trump announced additional duties on Chinese imports one day before he arrived in France. He then threatened to levy import duties on French wine “like they’ve never seen before”. The US president also said the British would lose “the anchor around their ankle” after leaving the EU.

Outside the summit, more than 9,000 anti-G7 protesters marched peacefully over a bridge linking France and Spain, about 30 kilometres from Biarritz. Yellow Jacket protesters held pictures of Macron upside-down.

In the midst of such turmoil, it would be difficult to make an impact as an invited guest. However, Morrison kept up his advocacy on the Christchurch Call.

At the close of the G7, Morrison announced an undisclosed amount of funding from the OECD and A$300,000 to fund the development of voluntary transparency reporting protocols for social media companies to prevent, detect, and remove terrorist and violent extremist content.

A summit of ‘senseless disputes’

This was the EU President Tusk’s final G7 Summit and he reflected sadly on Saturday that leaders of the world’s richest and most powerful democracies are increasingly unable to find “common language”, and were instead at risk of getting caught up in “senseless disputes among each other”.

The summit seems to have borne out his worse fears. Hopefully Scott Morrison was inspired by the fractured state of the big stage to become part of the solution.