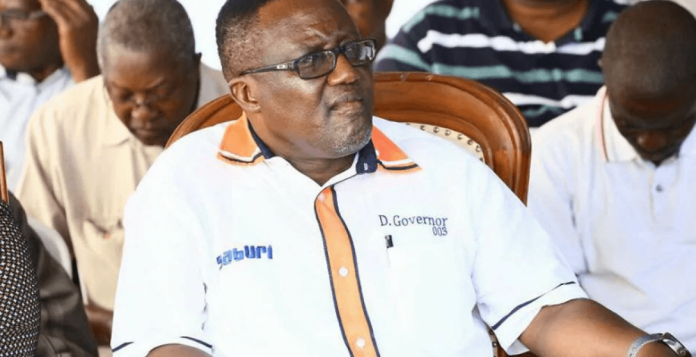 Kilifi Deputy Governor Gideon Saburi has said that he is ready to succeed his boss, Governor Amason Kingi in 2022 General Election when Mr Kingi leaves office.  – By Ramadhan Kambi.

Speaking during the burial of Eng Leornad Ruwa in Gotani village, Kaloleni, Kilifi county Eng Saburi said he was optimistic that he will get the support of his boss and clinch the top seat in the county.

“If my boss leaves office, then as the second in command at the county, I will succeed him. In fact I have started learning the ropes of leadership skills as a Governor from him,” he told mourners.

This is the first time that the DG is speaking over his intention to be the Kilifi Governor in 2022. The seat has currently attracted a number of politicians including Lands CAS Gideon Munga’ro and Malindi MP Aisha Jumwa. Kilifi North MP Owen Baya is also said to be in the race.

Already Ms Jumwa has been going around the region popularizing her gubernatorial debut on a Kadu Asili ticket.

The DG was however categorically that he will announce his full plans when the right time comes because he is still a civil servant and the campaigning period has not yet arrived.

“We shall have another platform to talk about politics but for today, I was just here to bury my colleague and our mentor who worked hard to make sure that roads in Kilifi are in good shape. When the right time comes, of course we shall talk about politics,” he said.

Eng Ruwa was a famous roads engineer in Kilifi County having worked with different government road departments before he died in late December.