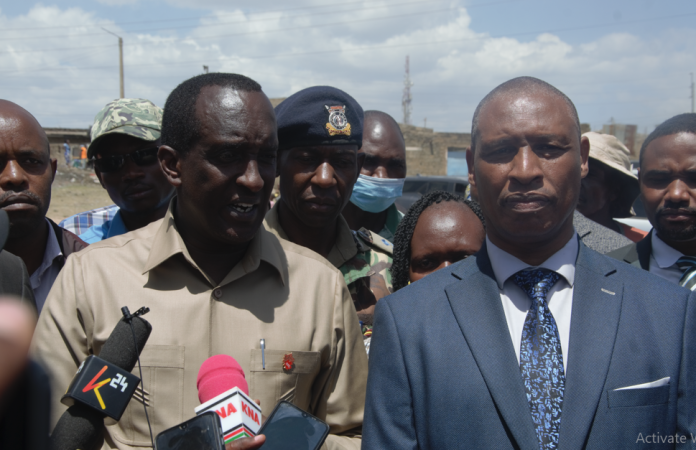 Traders in Narok County are set to benefit from multi-million modern market projects that are expected to accommodate more traders and improve their business premises.

This was revealed by Narok County Governor, Patrick Ntutu, when he led the Secretary, Urban and Metropolitan Development, Engineer BK Njenga and the Narok County Commissioner, Isaac Masinde, in inspecting major trading centers in the County where modern markets are expected to be put up.

Governor Ntutu said the move is as a result of the Kenya Kwanza Administration Agenda, where they had promised to empower low earning class first, in their economic model of ‘Bottom Up’.

“I will sponsor the committee in charge of the markets to go for benchmarking in towns with modern markets so that they can advise me on the best market design,” he said.

Other projects the County government in collaboration with the National government are taking to facelift Narok town include upgrading the drainages in town to stop flooding and building a footbridge along the Enkare Narok River to enable smooth traffic and human movement.

The Governor said he will be commissioning the Shs. 100 million bus stop in Narok town soon to dis-congest the town as currently the matatu vehicles drop and pick passengers along the road.

After the commissioning the bus stop, he said, any vehicle found picking or dropping a passenger along the road will be fined by our law enforcing officers.

The Governor said that plans are underway to beautify the town by planting flowers, trees and upgrading the footpaths to carpool tiles to reduce dust in town.

Engineer Njenga expressed satisfaction on the already available land to upgrade the markets and put up a housing project, saying he will send his officers on the ground to design the markets and advise the governor.

He said once the design is agreed upon, they will come up with a budget that will be sponsored by the two levels of government.

The Engineer advised the market committees to visit Gikomba, Githurai, and Chaka among others with modern markets so as to choose the most appropriate design they preferred.

Commissioner Masinde who led the security team expressed gratitude with the new initiative, saying it will boost security in the town as some of the open spaces were hideout points for criminals.

“The Government wants the traders to operate in a clean environment. I ask you to support the projects so that they can be completed within the stipulated time,” said Masinde.

John Kaari, the Chairman of Muthurwa market lauded the government for the great support, saying he has over 600 traders squeezed in temporary stalls.

“We are happy that the government has us in mind. The projects will be of great benefit to us once they are completed,” he said.