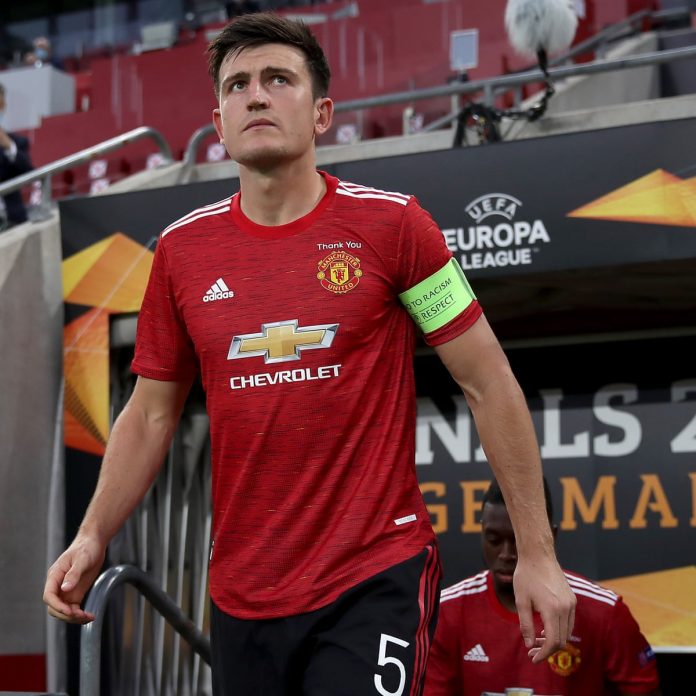 Manchester United captain Harry Maguire is set to spend a second night in a Greek jail cell after being arrested on the island of Mykonos for allegedly attacking police officers after a raucous night out.

The £85million England international was allegedly involved in a bust-up with a group of other Englishmen before becoming ‘very abusive and aggressive’ towards officers who arrived to intervene.

Maguire, 27, spent the night in a cell along with two other men thought to be fellow players aged 28 and 29, and the trio are expected to appear before a state prosecutor on the nearby island of Syros tomorrow.

One of the three men was transferred to Syros today while wearing a mask and dark sunglasses while hiding his face from the camera.

Maguire, who rakes in £190,000-a-week, is alleged to have punched an officer and then attempted to bribe the policemen.

The men have been charged with aggravated assault. Two of the officers suffered facial injuries during the scrap after they were allegedly hurled to the ground, punched and kicked.

Maguire was yesterday pictured drinking at a pool party at SantAnna Bar with fellow United youngsters Marcus Rashford, 22, and Brandon Williams, 19, as well as Love Island star Chris Hughes, 27, and snooker player Judd Trump, 31 and his brother Joe Maguire. It is not clear if anybody at this party was with Maguire later that evening.

Police today said that two groups of Englishmen were brawling outside Mykonos’ Fabrica bar in the early hours of Friday morning and when they tried to intervene they were rounded on by three men, including the centre-half.

‘When the brawl was all sorted out, one of the two groups – with the football players – started verbally abusing officers. There were several policemen there. At some point, one of the three members of the group – they were aged 27, 28, and 29 – threw a swing at one of the policemen and a fight ensued.’ Petros Vassilakis a police spokesman said.

‘All of the three were arrested but during the effort to do so, the other two, including the football player, got violent also. They threw down at least two policemen, hit them with their fists and kicked them.

‘I can’t tell you what they were telling us. All English swear words against the authorities and against the work of the police. All three, including the football player, are being held in custody, locked up in Mykonos cell. They will appear before a state prosecutor on the island of Syros later today to be charged with aggravated assault.’

Maguire plans to cut short his holiday and return to the UK, according to a source at Manchester United.

Lawyers for the club have been in contact with their player and they are awaiting clarification from police on the island over what charges he might face.

‘We are expecting more information from Mykonos as clarification is needed over exactly what happened and what charges he will face, if any.’ The lawyers said.

Manchester United said in a statement: ‘The club is aware of an alleged incident involving Harry Maguire in Mykonos last night.

‘Contact has been made with Harry, and he is fully co-operating with the Greek authorities.

‘At this time we will be making no further comment.’

Footage posted on a Greek website shows Maguire last night chatting with fans in the Matogiannia area of Mykonos town.

Britons were singing his name in the street and posing for selfies with the soccer ace before his things went awry.

Maguire is next due to play at Old Trafford for their first game of the season on September 19 against Crystal Palace.