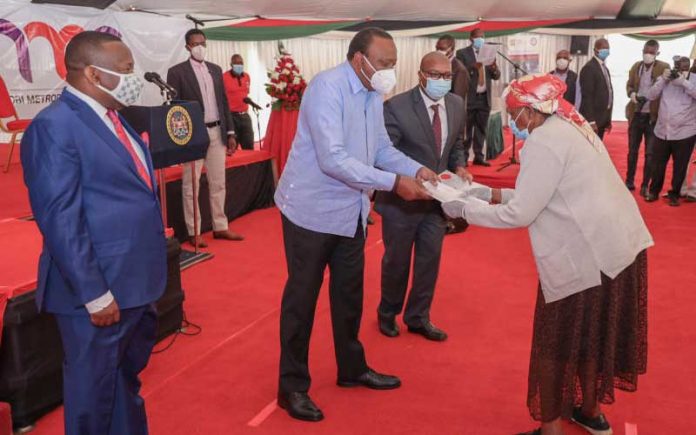 The President said leadership is about defending the rights of the people and not dividing them for selfish interests.

“There’s more that we can achieve as a country if we remove politics and fight for leadership, and focus on what we ought to do,” President Kenyatta said.

The Head of State spoke today at KICC in Nairobi County where he presided over the issuance of 38,000 land title deeds to residents of Embakasi Ranching, Tassia, Korogocho and Mbagathi River Bank estates.

“But because of conflicts. Especially conflicts involving leaders, this program (land titling) had not been done. But today we are fulfilling it,” the President said.

He encouraged recipients of the title deeds to develop their parcels and assured them that the Government will provide the supporting infrastructure.

“We are behind you, as you develop your plots. We will bring roads, bring sewerage services, bring electricity so that Kenyans can live well,” he said.

The Head of State announced a Government plan to construct a wholesale food market on a 20-acre parcel of land in Embakasi so as to uplift the socioeconomic wellbeing of the area.

Commenting on the stalemate in Senate regarding the county revenue sharing formula, the President said the process should be guided by the principles of justice and truth.

Lands CS Farida Karoney who also spoke at the event attended by Governor Mike Mbuvi Sonko, NMS Director General Mohamed Badi and a host of Nairobi leaders said her ministry had issued a total of 145,000 title deeds to city residents in the last eight years.

Nationally, she said the Jubilee administration had given Kenyans 5 million title deeds compared to 6 million documents issued in the first 50 years of Kenya’s independence.

Ms Karoney regretted that some of the elderly recipients of the title deeds had waited for over 50 years and informed Kenyans that her ministry was implementing a rapid titling exercise that will see more title deeds issued in coming months to land owners across the country.